At the end of January, the IMF released its annual Article IV Consultation for China, which provides an overview of China’s economic policy and economic trends. Support measures for the economy were cut back last year from 2020, and the fiscal policy stance in particular became more stringent. Ongoing flabby consumer demand and the slowdown in real estate investment led to an overall deceleration in economic growth. The IMF cut its 2022 GDP forecast to 4.8 %, but still sees growth accelerating slightly in the following years as consumption revives. Over the medium term, the IMF expects Chinese growth to slow as the population ages and productivity growth remains tepid.

Over the short term, the IMF recommends more accommodative fiscal and monetary policies. Support measures should focus on improving social safety nets as they boost consumption and reduce the need for households to save. Weak social safety nets (e.g. less than half of workers in urban areas have unemployment insurance) have hampered recovery in consumer demand and exacerbated income disparities. Over the medium term, the focus should fall on broader tax reforms and extending social security. This would encourage consumption-driven growth, narrow income inequality and broaden the revenue bases of the central and provincial governments. Raising the pension age would support the economy and help slow growth in pension spending. Monetary policy should be based on interest rate measures. This would help put an end to the use of targeted monetary policy measures that were again widespread during the pandemic – an approach that misallocate financing away from profitable enterprises. A more flexible exchange-rate regime would improve the effectiveness of monetary policy and help protect the economy from external shocks.

The spread of problems in the real estate sector, which constitutes the largest short-term risk, can even threaten financial stability. Yet even now, information is scarce on the nexus of banks, developers and the shadow banking sector. Higher corporate indebtedness has increased the financial sector vulnerability as the country moves beyond the pandemic. Continuation of financial support measures, however, worsens credit misallocation and delays acknowledging bad loans. Risks are elevated by the uncertainty among investors about the continuation of state support to troubled firms. Over the longer term, risk will come from the efforts to decouple the US and Chinese economies. Decoupling threatens to erode already low productivity. The IMF further warned that political uncertainty is heightened by regulatory measures in the technology and real estate sectors that further reduces the operating possibilities of private firms. This could lead to a rapid deceleration in productivity if state firms gain an increasingly prominent role.

Reforms aimed at top-line issues such as productivity and innovation have not proceeded as hoped. The IMF has long stressed the importance of reforming state-owned enterprises and improving the operating environment for private firms. Rebalancing of the economy away from heavy industry and construction to consumption-driven growth has reversed in recent years. Turning this trend around is essential if the country is to increase productivity, assure equitable income distribution and implement a greener growth model. The IMF considers it imperative that China accelerate its emission-reduction targets (the current goal is to begin reducing emissions after 2030). In addition to vast environmental benefits, the economic costs of reducing emissions now would be considerably smaller than waiting. In addition, the positive impacts of technological development would be realised sooner. Given the vast need for green financing, it makes little sense to rely on state firms. Thus, the IMF is calling for employing private capital. The IMF also restated its perennial recommendation that China urgently improve its reporting of macroeconomic data.

IMF estimate and forecast of indebtedness of China’s nonfinancial sector 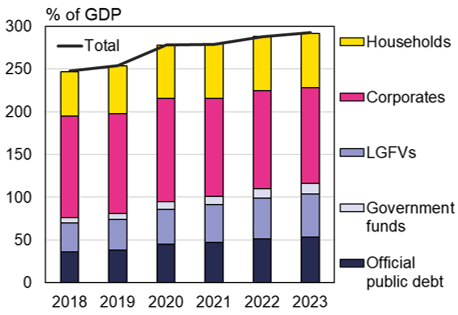