According to the Chinese zodiac, the Year of the Tiger arrived on February 1. In pre-pandemic years, Chinese would travel back to their home districts to celebrate the week-long New Year holiday. Due to covid restrictions largely implemented now at the local level, the number of travellers was as modest as last year. The increasing official case numbers, especially in Beijing, Zhejiang province and Guangdong province, prevented many internal migrant workers from returning to their home districts. Fewer than 30 million people a day travelled by car, train, plane or ship in the week preceding this year’s Lunar New Year holiday. In pre-covid times, the daily traveller numbers would have been closer to 80 million.

Domestic tourism was even weaker than last year. China’s culture and tourism ministry reports that the number of domestic tourist trips during the New Year week fell to 251 million, down 2 % from last year. Spending by holiday tourists amounted to just 290 billion yuan ($46 billion), a decrease of 4 % from 2021. Compared to pre-pandemic levels in 2019, domestic tourist travel this year was down by 26 % and tourist spending down by 44 %. In a departure from normal practice, China’s ministry of commerce has yet to release the headline numbers for retail sales and restaurant sales figures during the New Year holiday.

The opening of the 24th Winter Olympic Games in Beijing on February 4 failed to bring hoped-for boosts to tourism and private consumption. General admission tickets for Olympic events went unsold (even to Chinese spectators) due to covid restrictions. The only people in the stands this year are holders of invitation tickets. In addition, the movements of participating athletes, supporters and organisers are tightly regulated. Economic growth is further affected by the shutting down of polluting industries in 60 cities to improve air quality during the games. The Winter Olympics in Beijing and Zhangjiakou will continue through February 20.

The slowdown in economic activity is also apparent from the major purchasing manager indices (PMIs): the PMI published by China’s National Bureau of Statistics (NBS) and the one compiled by IHS Markit. Markit uses a smaller sample and mainly covers small and medium-sized companies from the private sector. The NBS PMI also includes China’s giant state-owned enterprises.

The NBS PMI readings remained just barely above the growth indicating level of 50 for both the manufacturing (50.1) and the services sector (50.3). Since last autumn, the services employment subindex has been clearly weaker than in pre-pandemic years. The outlook for the service sector has continued to weaken since the beginning of this year. In contrast, the manufacturing employment subindex has remained slightly higher during the pandemic, and the outlook for large firms in particular has remained rosy. Markit’s Manufacturing PMI for January fell to 49.1. The Services PMI was still above the 50-point mark (51.4), but down from December (53.1). 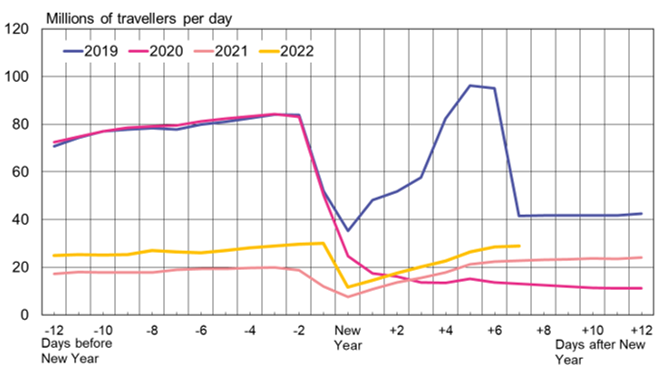