At an estimated $630 billion, Russia had the world’s fifth largest foreign currency and gold reserves at the end of 2021. The value of Russia’s forex reserves grew by about 6 % last year, and roughly 21 % of Russia’s reserves consisted of gold (presently valued at $133 billion). During the first weeks of 2022, the reserves have risen even higher. They stood at $638.2 billion on January 14.

Countries with larger forex and gold reserves than Russia at the end of last year were China ($3.427 trillion), Japan ($1.406 trillion), Switzerland ($1.083 trillion as of end-November) and India ($633 billion). Central banks that target a specific exchange rate often maintain large forex reserves. While the Russian ruble now floats freely, the CBR still is charged with currency operations in the market on behalf of the finance ministry according to the government’s budget rule when the oil price differs from the defined level. In addition, the dollar-value of Russia’s forex reserves is affected by swings in the price of gold and changes in the exchange rates of other major currencies relative to the US dollar.

The structure of the CBR’s forex reserves diverges considerably from other central banks. As of end-June 2021, euro assets made up 32.3 % of reserves and dollar assets just 16.4 %. In 2018, the CBR converted a substantial amount of its dollar assets into Chinese yuan (BOFIT Weekly 3/2019). As of June 2021, 13.1 % of Russia’s reserves consisted of yuan-denominated assets, while gold accounted for 21.7 %. IMF figures show that the yuan’s share of the central bank reserves averaged just 2.6 % in June 2021. The CBR’s yuan assets represent about a quarter of all yuan assets held by central banks outside China (which were $314 billion at the end of June 2021). 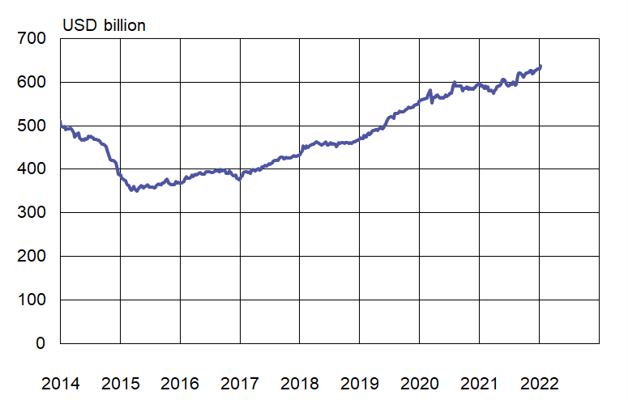