Preliminary balance of payments figures from the Bank of Russia show a strong recovery in the country’s earnings from exports of goods and services, i.e. by about 40 % last year from the 2020 recession. Export revenues came close to matching the peak levels of 2011–2014.

Export earnings from energy commodities (crude oil, petroleum products and natural gas) rose by nearly 60 % on the recovery in export prices. Earnings from other goods (mainly low-processed products) increased by about a third from the 2019–2020 level, also mainly on higher export prices. Indeed, export earnings on other goods hit an all-time high. Energy’s share of Russia’s earnings on exports of goods and services bounced back to a roughly 45 % share, approaching the pre-2020-slump levels of around 50 %, but still not near the roughly 60 % share of the early 2010s. The share of other goods increased from well below 40 % in the latter half of the 2010s to around 45 %.

After strong growth, Russian spending on goods imports in 2021 exceeded the 2019 level by nearly a fifth, but did not quite reach the record highs of 2012 and 2013. Import spending on services excluding travel recovered to 2019 levels, albeit below the highs of 2013 and 2014. Travel spending also started to recover, but was still just a third of what it was in 2019.

The rise in Russian export earnings in 2021 far surpassed the recovery in spending on imports, driving the goods trade surplus to a top level – over 10 % of GDP. Even though the category of dividend payments and interest payments on debt by Russia’s corporate sector increased substantially, the current account surplus still hit a record high of nearly 7 % of GDP.

The financial account between Russia and the rest of the world remained significantly in the red last year (i.e. a large net capital outflow) despite the CBR receiving a notable sum of IMF special drawing rights (SDRs), corresponding to nearly 1 % of GDP, as part of the IMF’s global support arrangement. The net outflow of capital from the private sector increased to more than 4 % of GDP. In particular, outward corporate direct investment increased, far exceeding inward FDI flows to Russia’s corporate sector. Companies continued to make substantial foreign portfolio investments and grant loans to borrowers outside Russia. The outflow of foreign portfolio investments in Russian firms, as well as repayments of Russian firms on their foreign loans, remained considerable. 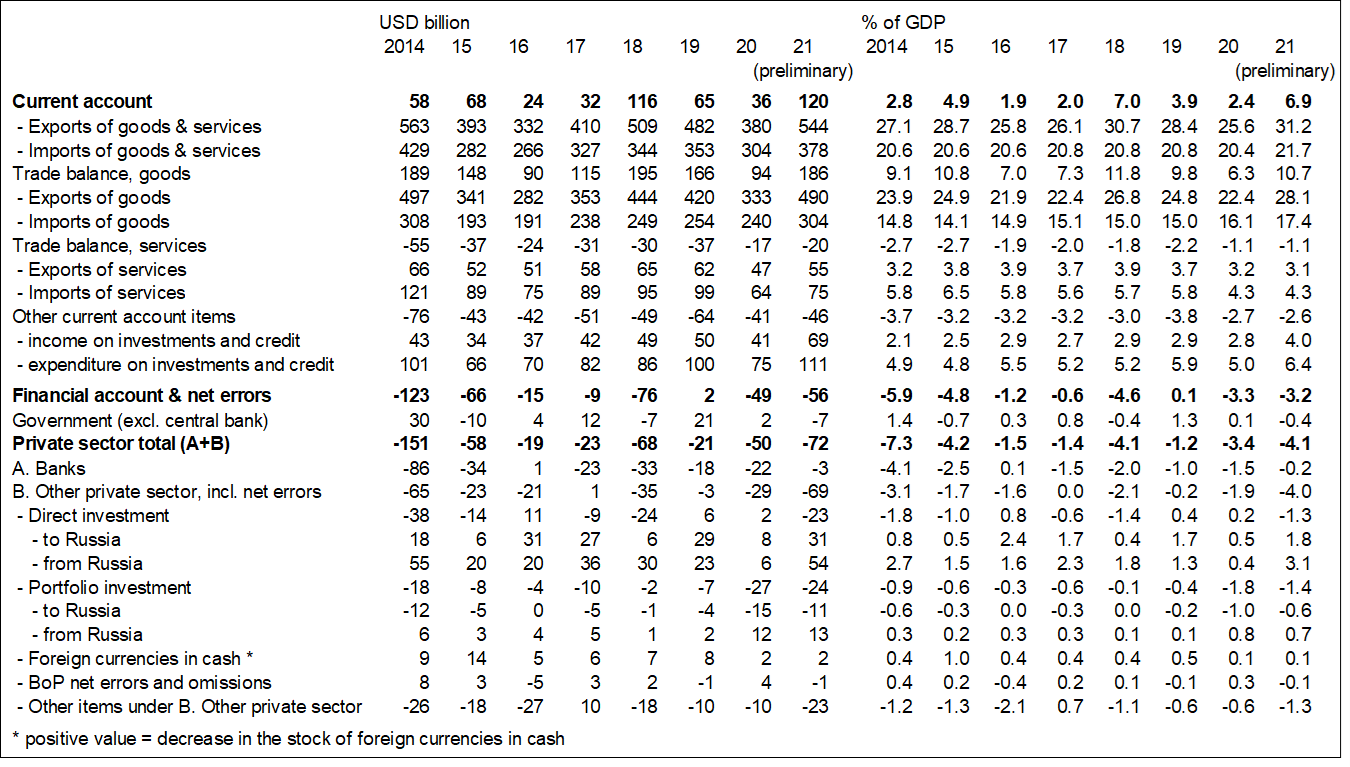