China’s National Bureau of Statistics reports that the country’s total grain harvest this year amounted to 683 million metric tons, a 2 % increase from 2020. Both in 2019 and 2020, the on-year growth of the grain harvest remained below 1 %. Over 90 % of the total grain harvest in China consists of maize, rice and wheat. The 2021 maize crop saw the biggest jump, up nearly 5 % from 2020 to 273 million tons. In contrast, wheat production this year was up by just 2 % and rice production by just 0.5 %. The 2021 harvests were impacted by record rains (particularly in Henan province) and the extended drought in northwestern provinces.

China is largely self-sufficient in production of maize, rice and wheat. Grain cultivation in China is most extensive in the country’s eastern provinces, most notably Heilongjiang, Henan and Shandong. 12 % of China’s land area is under cultivation, which is more than e.g. Russia (just over 7 %), but far less than e.g. Vietnam (23 %), Thailand (33 %) or India (over 50 %). China has long struggled with soil quality and sufficiency issues caused by e.g. contamination and overuse of fertiliser.

China’s meat production has largely recovered from the 2019–2020 African swine fever epidemic. China’s hog population has this year returned to normal levels, about 450 million. This has also normalized pork prices, which have been on average about 40 % y-o-y lower during the second half of the year. China is the world’s largest pork producer, and over half of all meat production in China is pork. Beef, lamb and poultry prices are up just slightly from a year ago. In the first eleven months of this year, meat production overall was up by more than 20 % from the same period in 2020. Meat imports have also gradually declined since summer. 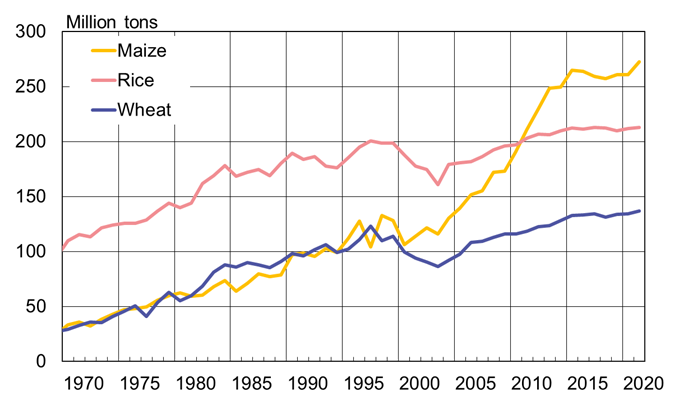