On Monday (Dec. 27), China released a revised version of its negative list, which enters into force on Saturday (Jan. 1), The negative list specifies those branches or activities in which foreign ownership is restricted or forbidden. The number of restricted items has been lowered from 33 to 31. Restrictions on foreign ownership in automobile manufacturing have been dropped altogether and foreign carmakers no longer need to form a joint venture with a Chinese partner to build passenger cars in China. The limits on the number of vehicle joint ventures has also been eliminated. Manufacture of radio and television equipment and components are no longer regulated. The negative list governing foreign investment in China’s free trade zones was also updated. It reduces the number of off-limits activities from 30 to 27.

The updated lists provided more detailed explanatory notes about the foreign listing of Chinese firms operating in branches restricted from receiving foreign capital in China. Most firms have resorted to variable interest entity (VIE) structures in which the Chinese parent company establishes a foreign subsidiary (typically in a tax haven) to be listed on a foreign stock exchange in a third country that typically shares profits generated by the parent. From now on firms will have to seek official permission to list on a foreign exchange and comply with stricter requirements. Foreign investors cannot participate in company operations or management, and are subject to limits on foreign ownership (the ceiling on foreign ownership in China is currently 30 % and a single foreign shareholder may own no more than 10 % of the company’s shares). VIEs are not strictly forbidden, however, and have been used by hundreds of Chinese firms, including tech giants such as Alibaba. A representative of the National Development and Reform Commission (NDRC) said that the foreign ownership limits would not apply retroactively to such firms.

At the beginning of December, the US Securities and Exchange Commission (SEC) finalised its rules for requiring auditing inspections of companies listed in the US and declaring if they are owned or controlled by a foreign government. Noncomplying firms can be delisted from US exchanges after three years. The new rules were implemented under the Holding Foreign Companies Accountable Act enacted at the end of the Trump administration (BOFIT Weekly 50/2020). The rules also demand more detailed information about firms using VIE structures. Mainland Chinese and Hong Kong-based firms listed in the US have a long-running dispute over allowing SEC officials to inspect their auditors. Chinese officials have said that the secrecy was needed to protect national security, but have recently indicated they are trying to resolve the issues and improve cooperation with the US on the matter.

In May, three giant Chinese telecom operators were delisted from the New York Stock Exchange. China Mobile recently announced plans to list on the Shanghai Stock Exchange. Observers note that the move is largely a symbolic gesture. The firm is already listed in Hong Kong and it only plans to list roughly 4 % of its shares on the Shanghai bourse. China Telecom listed earlier this year in Shanghai. Markets were shaken in early December with the announcement of ride-hailing firm Didi’s plans to leave the New York exchange and list instead on the Hong Kong exchange. A couple days after Didi listed on the New York exchange in late June 2021, it became the target of an investigation by Chinese cybersecurity officials, who removed its apps from the market in China. Didi’s proposed listing in Hong Kong still requires approval from the Chinese authorities.

The United States has also restricted investment in Chinese firms based on their connections with the Chinese military industry. On December 16, the US treasury department named eight new Chinese firms that are now off limits to US investors (including drone manufacturer DJI) due to their involvement in human rights violations in Xinjiang. Several dozen Chinese firms were already on the US investment ban list. Earlier in December, AI software provider SenseTime was put on the list. SenseTime postponed its IPO, but debuted yesterday (Dec. 30) in the Hong Kong exchange. All of the named firms were already on the US “entity list,” which restricts exports of US products and technology.

The share prices of Chinese firms listed in the US (S&P/BNY Mellon China Index) and Hong Kong (Hang Seng ChinaEnterprises Index) have declined this year. In mainland China (CSI 300 Index) the share prices have been more steady. 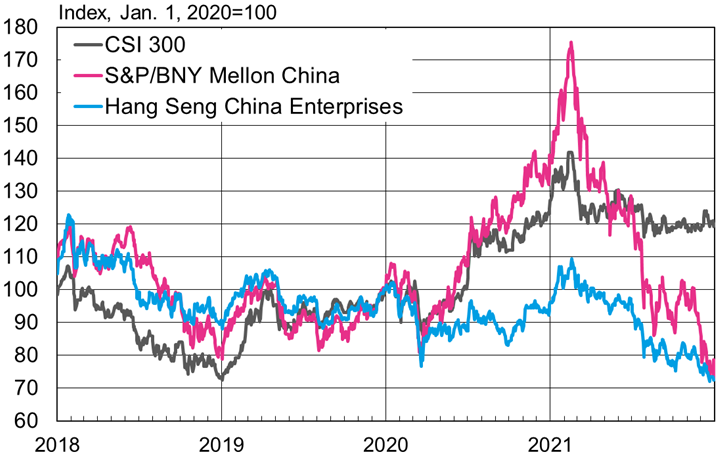