On Monday (Oct. 4), US trade representative Katherine Tai outlined preliminary targets for the Biden administration’s China trade policy. The public statement was long-awaited as the new administration has up to the present kept fully in place trade measures introduced during the Trump administration. Under the goals announced on Monday, the US will seek to restart bilateral trade talks. Punitive tariffs will remain in place and US plans to press China to keep its promise to increase US imports as agreed in the phase one trade agreement. At the same time, the US said it was reinstating the possibility for US importers to apply for relief from tariff charges. The possibility to apply for an exemption from tariffs has been on hold since the start of the year. On Wednesday (Oct. 6), an administration spokesman announced that presidents Joe Biden and Xi Jinping are planning for a virtual meeting before the end of this year.

In the course of the US-China trade war, additional tariffs have been imposed on most bilateral goods trade. This caused bilateral trade to contract, especially during 2019. As the US still accounted for nearly 9 % of China’s goods imports in 2017, its share fell to below 6 % in the second half of 2019. At the same time, the US share of Chinese goods exports fell from 19 % to below 17 %. Phase one of the US-China trade agreement, which entered into force in February 2020, failed to significantly improve the situation, and China has missed the goals for additional US imports. According to the US-China phase one tracker maintained by the Peterson Institute for International Economics (PIIE), less than 60 % of agreed imports were realised last year. Figures from January to August indicate that China is heading this year to meet about 70 % of its commitment. In contrast, Chinese exports to the US have recovered strongly during the pandemic, so the bilateral trade surplus has risen to unprecedented levels.

In recent years, China has concentrated its efforts on improving trade relations at the regional level. Just a year ago, China signed the Regional Comprehensive Economic Partnership (RCEP) trade agreement with 15 Asian countries, and currently continues its trilateral trade talks with South Korea and Japan. Just a few days after the signing of the RCEP agreement, China announced plans to also join the Comprehensive and Progressive Agreement for Trans-Pacific Partnership (CPTPP). China’s trade minister Wang Wentao submitted China’s official accession application a few weeks ago to New Zealand trade minister Damien O’Connor. The CPTPP comprises eleven countries, including Australia, New Zealand, Canada, Mexico, Japan and Singapore. The UK launched accession talks in June. However, China CPTPP membership is looking highly unlikely. For starters, the trade agreement would require opening up of China’s service sector and significant tariff reductions, as well as implementation of legislation concerning e.g. state-owned enterprises and labour unions. The situation is further complicated by inflamed China-Australia relations as accession requires the unanimous approval of all eleven member states. To top things off, two days after China submitted its application, Taiwan filed its own accession application to which Japan gave its immediate support. 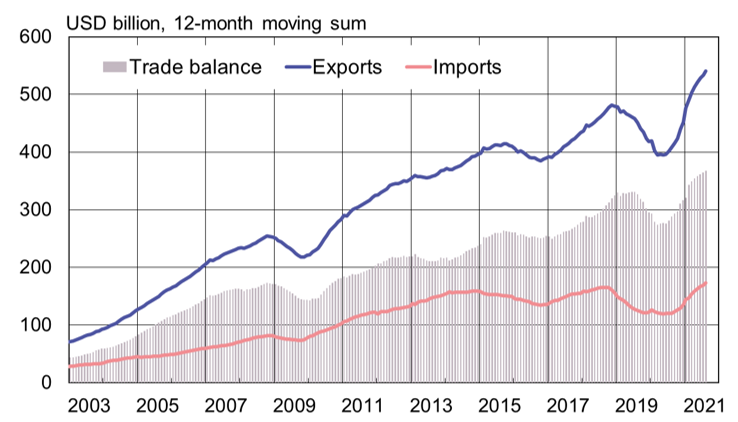