The problems of developer Evergrande have affected the access to financing of smaller construction companies. In October, several construction firms were unable to service their foreign debt obligations. With increased market uncertainty, real estate sales of builders are reportedly down sharply compared to last year, which has left many hurting. International ratings agencies have lowered builder credit ratings. Their share prices and the value of bonds have declined markedly.

Besides Evergrande, markets were stunned in October by a spate of offshore bond payment defaults. These included China Properties Group ($226 million), Fantasia Holdings ($206 million), Sinic Holdings ($246 million) and Modern Land ($250 million). Additionally, Xinyuan Real Estate Co. swapped $205 million in maturing bonds for new bonds maturing in 2023. The value of bonds of other construction companies have also plummeted. Most notable among them is the Kaisa Group, which became the first Chinese construction company to default on its offshore bonds in 2015. Kaisa has a considerable amount of offshore debt. Today, trading of Kaisa’s stocks was halted in Hong Kong stock exchange.

It is almost certain that some of the many firms that have bond payments coming due this year will fail at servicing their debts. The situation has deteriorated rapidly as issuing new bonds abroad has become significantly harder for Chinese firms. Foreign investors are worried by the fact that Chinese firms may prioritise their domestic bond payments and other debt commitments over the servicing of their offshore debts. As construction firms have considerably less international borrowing than domestic borrowing, their prime directive is maintaining creditworthiness in mainland China’s market.

In October, Evergrande avoided an official declaration of payment default by paying a total of $130 million in belated coupon payments on its foreign bonds within the 30-day grace period. The company’s financial condition apparently has not improved. In October, Evergrande missed payment of another $380 million of coupons. The first 30-day grace period ends on November 11. In November and December, the company must pay $340 million in coupon payments of its foreign bonds and the foreign bonds of its subsidiaries. Evergrande owes a total offshore debt of $19 billion, and a failure to pay by the deadline could trigger cross-defaults on all of these. The foreign debt is still a minor issue given the company’s total debt of about $300 billion.

The total offshore payment defaults of Chinese firms this year has already reached a record of about $9 billion. Bloomberg reports that builders are responsible for about a third of defaults. Still, the value of defaults of construction companies is relatively small compared to their offshore bond issues ($207 billion). The CRIC real estate research company reports 39 domestic defaults by Chinese construction companies in the first nine months of this year, a 160 % increase from the same period in 2020 (47 billion yuan, $7 billion).

At a meeting with construction companies in late October, representatives of the National Development and Reform Commission (NDRC) and the State Administration of Foreign Exchange (SAFE) ordered the firms to submit reports on the foreign debt situation and provide a timely heads-up of possible troubles ahead. The PBoC commented on the struggles of construction firms for the first time in October, saying that the sector’s risks are controllable and the situation of most construction companies is stable. Nevertheless, the PBoC exhorted developers to “actively” settle their outstanding foreign debt obligations. Central bank governor Yi Gang said that officials are working to contain the spread of Evergrande’s problems. According to the PBoC, Evergrande’s debts are not overly concentrated in a particular financial institution. No official measures to ease the debt situation of construction firms generally have been announced.

Indeed, most Chinese construction firms are not in as bad shape as Evergrande. Overall financial health of China’s larger builders seems to have improved since last year, and fewer firms currently overstep any of the “three red lines” laid down last year by Chinese officials (BOFIT Weekly 06/2021).

Fitch, Moody's and S&P have all been bust lowering the credit ratings of Chinese construction companies 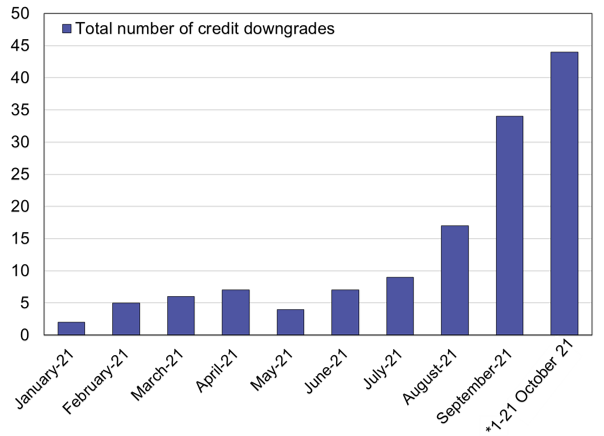 Sources: Bloomberg compilation based on figures from Fitch, Moody’s and S&P; BOFIT.