In mid-October, the People’s Bank of China and the China Banking and Insurance Regulatory Commission (CBIRC) released a list of China’s domestic systemically important banks (D-SIBs). The 19 banks on the list fall into four groups. These 19 banks face stricter rules with respect to e.g. public disclosure. The fourth, and most systemically critical, group is made up of China’s four giant state banks: Bank of China, China Construction Bank, Industrial and Commercial Bank of China and Agricultural Bank of China. The four state-owned behemoths are also classed as global systemically important banks (G-SIBs). The third group includes the state-owned Bank of Communications, China Merchants Bank and Industrial Bank. The first and second groups contain, among others, Postal Savings Bank of China, China CITIC Bank, China Everbright Bank, Bank of Beijing and Ping An Bank. Missing from the list are China’s policy banks: Agricultural Development Bank of China, Export-Import Bank of China and China Development Bank. The PBoC and CBIRC will update the D-SIB list every year.

Late last month, the PBoC, the finance ministry and CBIRC together issued new solvency regulations for Chinese G-SIBs. These banks are required to have a minimum total loss absorbing capacity (TLAC) of 16 % of risk-weighted assets by 2025 and 18 % by 2028. The timetable follows the recommendation for emerging economies from the Financial Stability Board, an international body that monitors the global financial system. In addition, the leverage ratios of these banks should rise to at least 6 % by 2025 and to 6.75 % by 2028.

The PBoC’s latest quarterly survey of commercial banks found that responding bankers generally felt economic conditions had weakened a bit in the third quarter. Corporate borrowing demand had also subsided from previous quarters. On average, banks had not seen much change in their own profitability in the third quarter. The pandemic and increase in payment defaults have affected small and mid-sized banks much more than big banks. All of the “Big Four” state-owned banks reported that their third-quarter profits were up by over 10 % y-o-y. They also said that their ratios of non-performing loans (NPLs) to the total credit stock was either unchanged or fell slightly from the second quarter. The actual amount of NPLs is generally thought to exceed the amounts reported by banks.

In order to bolster their balance sheets and reduce risk, Chinese officials have encouraged small and mid-sized banks to merge into larger entities. At the end of October, for example, Henan’s provincial bank, Zhongyuan Bank, announced plans to merge with three regional banks. One of those banks, Bank of Luoyang, is listed as a major creditor of troubled developer Evergrande. Zhongyuan Bank itself was created in 2014 through the merger of 13 small banks. After the planned merger, Henan province will be left with two city commercial banks. During the pandemic, other local banks in Shanxi, Sichuan and Liaoning provinces were also merged to create larger banks. Over 4,000 financial institutions classified as banks currently operate in China. Most are small regional operations. 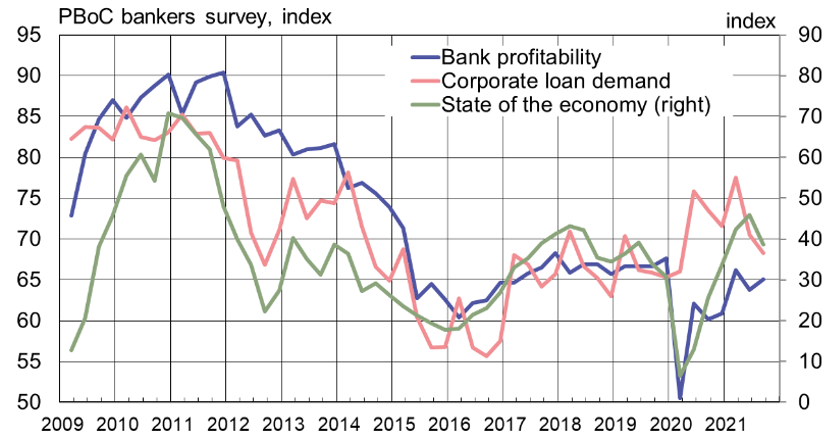