Reported new covid-19 cases in China have increased steadily since July. On August 9, China surpassed 140 new cases in one day, a level not seen since January. The delta variant of covid, which has a much higher effective reproduction rate than the original virus of China’s first wave, has spread to most provinces. China again finds itself restricting movement within and between cities, limiting the size of gatherings and cancelling live events.

China’s covid-fighting strategy features aggressive testing and tracing, as well as isolation of infection clusters through strict lockdown. The pace of vaccination also picked up considerably this summer. By the end of the first week of August, China had administered nearly 1.8 billion vaccine doses, an amount sufficient to provide two doses of vaccine to about 64 % of the Chinese population. The last-released official figure on vaccination coverage is from early June, when just over 800 million doses had been administered. At that point, 43 % of the population (620 million) had received at least one vaccine dose, and 15.5 % of the population (220 million) was fully vaccinated.

It may well be that China’s phenomenally successful suppression strategy no longer works with the highly infectious delta variant, which can still cause breakthrough infections and further spread among the vaccinated. In July, nine employees at the Nanjing airport tested positive for covid, even if over 90 % of the airport staff were already fully vaccinated. This month, five cases were found in the west Yunnan city of Ruili, where nearly 97 % of the population were already fully vaccinated.

A household survey conducted in April-June by the People’s Bank of China found for the first time since the start of the pandemic a small increase in the share of households planning to increase consumption. And according the China’s National Bureau of Statistics, over 60 % of first-half growth came from increased consumption (BOFIT Weekly 28/2021). The economy overall, and the service sector and retail sales in particular, nevertheless were still experiencing significantly lower growth than before the pandemic. More extensive restrictions and lockdown measures in response to the delta surge could further delay the recovery in consumer demand.

China’s latest wave of covid infections took off in July 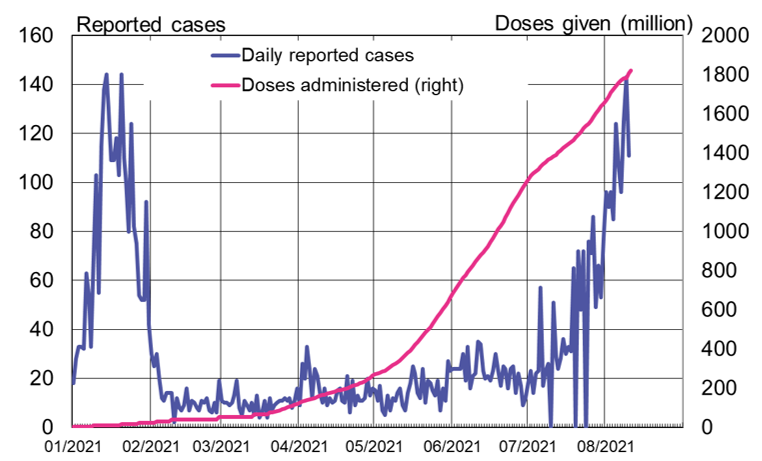 Sources: Our World in Data, University of Oxford and BOFIT.