China’s National Bureau of Statistics reports that GDP grew at 7.9 % y-o-y in the second quarter, slowing from 18.3 % in the first quarter. The y-o-y figures are affected by the very low basis during the covid pandemic especially in Q1 last year. The NBS on-quarter seasonally adjusted growth figures showed an acceleration in April-June growth to 1.3 % (5.3 % in annualised terms). January-March growth was revised down to 0.4 % q-o-q. The average two-year annualised growth also accelerated in the second quarter to 5.5 %.

NBS figures also show that over 60 % of first-half growth came from increased consumption. Fixed investment and net exports both contributed close to 20 %. Looking at the supply side, industrial and construction output grew slightly faster during the first half than in years before the pandemic (the two-year average for on-year growth in 1H21 was 6.1 %). The service sector growth, in contrast, has yet to recover to the pace of 2019, when growth was already slowing (two-year annualised average for 1H21 was 4.9 %).

June industrial output rose by 8.3 % y-o-y, while retail sales were up by 9.8 % in real terms. On-year growth in both categories slowed slightly from May. Looking at average two-year growth, the pace of growth in retail sales, even with a slight pick-up in June, was still well below pre-pandemic levels.

Consumer price inflation slowed slightly from 1.3 % in May to 1.1 % in June. Consumer prices were particularly affected by a drop in pork prices. The NBS points out that this effect itself was sufficient to lower June inflation by eight-tenths of a percentage point. Pork prices in China, which soared in 2019 due to an outbreak of African swine fever virus, had remained high until recently, when wholesale pork prices finally returned close to early 2019 levels. Producer prices in China have risen rapidly. Officials have been recently worried about their impact on the profitability of especially smaller firms. June producer prices still climbed by a brisk 8.8 % y-o-y, even if growth was down slightly from 9 % in May. 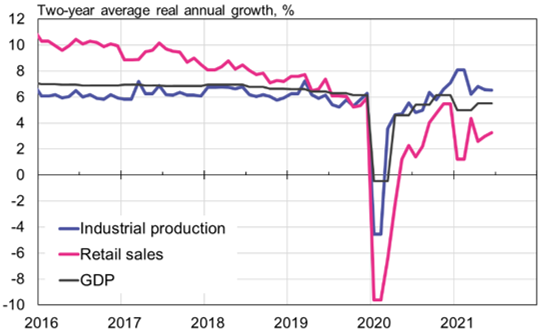