The Hong Kong Census and Statistics Department reports that the special administrative region’s GDP rose by 7.8 % y-o-y in the first six months of 2021. The high on-year growth largely reflects the low basis reference of the first half of 2020. The recovery, however, took a small hit in the second quarter of 2021 as GDP contracted slightly from the first quarter. Goods exports and imports recovered in the first half to pre-pandemic levels, while private consumption rose in the second quarter by just 6.5 % y-o-y and services exports by 2.6 %. Hong Kong’s weak comeback is further reflected in the unemployment rate, which is still higher than pre-pandemic levels. The June unemployment rate was 5.5 %, up from 2.8 % in the first half of 2019. Hong Kong has relied on a range of stimulus measures to support its economy. The government announced at the beginning of this month that it was initiating a new support package for the tourism sector.

The Hong Kong economy entered recession before the arrival of the covid pandemic due to the wide protests and the US-China trade war. As a result, the Hong Kong economy shrank for six quarters in a row starting in the third quarter of 2019. Hong Kong’s economic distress has been compounded by the loss of tourist traffic. Hong Kong saw the arrival of an average of just 6,100 tourists a month during the first six months of this year, which is just over a tenth of a percent of the first-half of 2019 average (5.8 million tourists a month). In previous years, nearly 80 % of tourists came from mainland China. Hong Kong’s tight entry restrictions remain in place, however. Even people coming from the mainland must submit to a minimum quarantine period of seven days. From an epidemiological standpoint, Hong Kong’s situation in enviable. The last case of community transmission occurred in early June, and 41 % of the population is now fully vaccinated.

The lack of tourists has slowed Hong Kong’s recovery 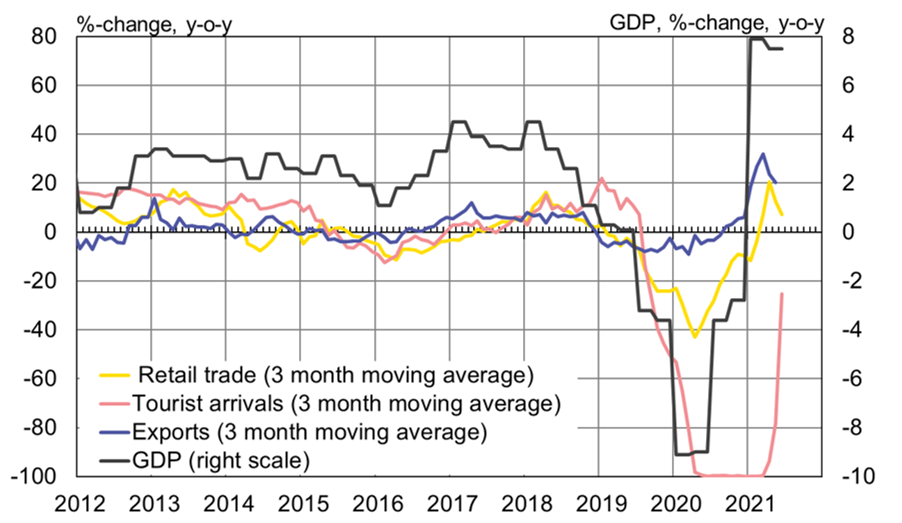