As of end-June, Russia’s National Welfare Fund, which holds surplus oil & gas revenues, was worth about 187.6 billion USD or 11.7 % of GDP. While the Fund has grown slightly this year, nearly all growth has come from valuation changes in securities held by the Fund, particularly the rise in the price of Sberbank shares. The amount of the Fund invested in liquid securities such as government bonds has remained almost unchanged since spring 2020. Despite a public sector deficit last year of 3.8 % of GDP, the Russian government refrained from dipping into Fund assets and covered the deficit instead with additional borrowing.

In early June, Russia’s finance ministry announced (BOFIT Weekly 23/2021) plans to shift dollar-denominated NWF assets into assets denominated in other currencies. In June alone the amount of dollar investments decreased from $35 billion to $3 billion. At the same time, the amount of euro-denominated investments increased slightly. The big change was in assets denominated in Chinese yuan, which nearly doubled. Investments in gold rose from zero to $21 billion. As of end-June, the composition of the highly liquid part of the NWF broke down as follows: 39 % in euro assets, 30 % in yuan assets, 18 % in gold, 5 % in British pound assets, 5 % in Japanese yen assets and 3 % in US dollar assets. The CBR invests the liquid share of the Fund on behalf of the finance ministry. Our BOFIT Policy Brief on Russia’s international reserves and oil funds (4/2015) provides a good illustration of this process and its impact on the central bank’s balance sheet.

As of end-June, the CBR’s foreign currency and gold reserves were worth $591.5 billion, of which $130 billion (22 %) was held in gold. The CBR has gradually reduced its US dollar holdings since 2018. As of end-2020, the share of dollar assets in Russia’s foreign currency reserves was just 21 %, while the euro’s share rose to 29 %. Gold’s share was 23 % and Chinese yuan-denominated assets 13 %. At the end of 2020, the CBR held yuan-denominated securities worth $75.3 billion. IMF data show that the yuan only accounted for 2.1 % ($269.5 billion) of global currency reserves at the end of 2020. Russia’s share of this was an impressive 28 %. Russia’s decision to ditch the dollar means that the composition of the CBR foreign currency reserves are distinct from those of any other central bank. 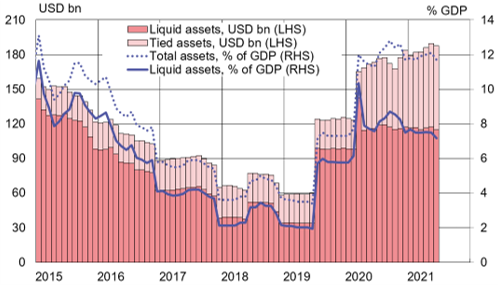