China’s cross-border interbank payment system, CIPS, which is administered by the People’s Bank of China, handled 2.2 million payment transactions last year with a total value of 45.2 trillion yuan. The volume of CIPS payment traffic last year rose by about 20 %, while the total value of transactions was up by over 30 %. Growth was particularly strong in the final quarter of 2020.

As its name implies, CIPS is used for international transfers of yuan-denominated transactions between banks. Most CIPS payment traffic moves between Hong Kong and mainland China, although an exact breakdown is not revealed from the available CIPS statistics. Banks in ASEAN countries also use the system, accounting for 8 % of CIPS payment transfers last year and 15 % of value. Use of CIPS in Africa, Latin America and Europe is still marginal, accounting for only about 0.5 % of payment transactions and less than the 0.1 % of their value.

As of end-May, 1,189 banks representing roughly 100 countries used CIPS. Of these banks, 569 operated in mainland China, 355 elsewhere in Asia, 154 in Europe, 42 in Africa, 26 in North America, 23 in the Australia & Pacific region and 17 in Latin America. Many of the foreign bank branches are subsidiaries of Chinese banks. There are 47 direct member banks and most of the banks linked to the system (1,142) are indirect participants. Banks directly plugged into the system act as transfer hubs to pass payments on to indirectly linked participant banks. All direct participants are subsidiaries of large Chinese banks.

China decided to establish its own international payment system in 2012 and CIPS began its operations in 2015 (BOFIT Weekly 26/2015). The main purpose of the system is to encourage international use of the yuan, but it also provides an alternative to the western SWIFT payment system. Despite the rapid growth in CIPS payment traffic, the volume of payments handled by the system are tiny relative to the volume handled by the SWIFT system. SWIFT and CIPS have cooperated for years on integration of the two systems. The threat of the US imposing financial sanctions to some actors that limit their use of USD may have increased the interest in the CIPS alternative. 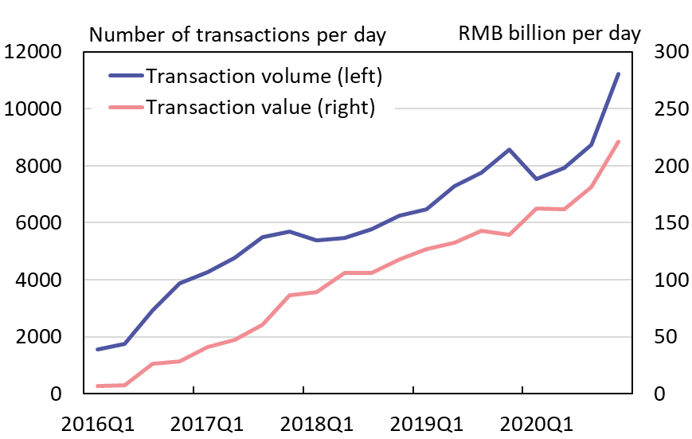