The required reserve ratio (RRR or the mandatory share of bank deposits held with the central bank) for most banks was lowered on Thursday (July 15) by 0.5 percentage point. The headline RRR level is now 12 % for large banks, 9 % for mid-sized banks and 5.5 % for small banks. In addition, targeted RRR reductions apply for banks that meet certain criteria. Individual banks RRRs are also periodically considered depending on bank’s riskiness and systemic importance. The latest RRR reduction does not apply to banks that already enjoy the lowest RRR of 5 %. The People’s Bank of China estimates that the average RRR for the banking sector overall dropped to 8.9 %. The RRR was last lowered for all banks in January 2020. Additional targeted reductions were made in April-May 2020.

The PBoC emphasised that it was not implementing a general shift in monetary policy stance. It estimated the RRR reduction boosted market liquidity by 1 trillion yuan (130 billion euros) through the release of funds otherwise tied up in reserves. The PBoC expects the freed-up funds to be used for paying off maturing medium-term lending facility (MLF) loans, as well as assure adequate liquidity for tax payments due in July. On Thursday (July 15), the PBoC issued only 100 billion yuan in new one-year MLF loans as 400 billion yuan in MLF loans came due. The interest on the new loans was unchanged. The central bank’s policy rates, including the bank lending benchmark loan prime rate (LPR), were last adjusted in April 2020.

The PBoC announcement of the RRR lowering on July 9 followed a State Council meeting at which officials were particularly worried about the plight of smaller firms struggling, among other things, with higher world commodity prices and signalled an RRR cut to help them. Small firms’ lack of access to affordable credit is a long-standing problem in China. The RRR reduction should also ease stress on banks.

Reduction in loan pricing was aimed last month also through a technical adjustment in how banks can set their deposit rates. Reduction in the deposit rate ceiling is hoped to translate to lower lending rates especially for small firms. Although bank deposit rates in principle were deregulated in 2015, they remain controlled by the banking sector’s self-regulatory body that is overseen by the central bank. The PBoC still publishes benchmark rates for bank deposits. Instead of using a multiplier factor, to set the ceiling on bank deposit rates (e.g. a multiple of 1.4), the latest adjustment calls for adding a defined margin to the benchmark rate.

Even with the latest reduction in reserve requirements, Chinese monetary policy has not been especially accommodative this year. Through its open market operations and central bank lending, in net terms the PBoC’s withdrew 530 billion yuan from the markets in 1H21. After last year’s round of economic stimulus measures, the PBoC has returned its focus to controlling indebtedness growth and financial market risks. On-year growth of the broader lending measure “aggregate financing for the real economy” (AFRE) slowed to 11 % in May and June, down from 13.7 % in October 2020. The size of AFRE relative to the general economy has also declined slightly this year. As of end-June, it was 276 % of GDP (280 % at the end of 2020, and 255 % at the end of 2019). 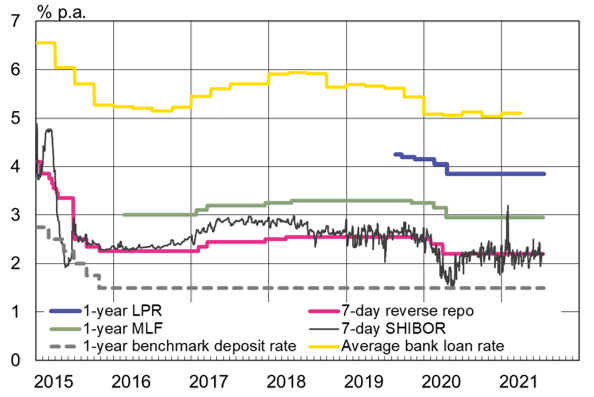