Investments have declined significantly after the peak year 2016, a result of China’s stricter outward investment and capital controls. In addition, screening of Chinese investment has been increased in the United States and Europe in recent years and the covid-19 pandemic last year caused many firms to postpone their investment plans. Despite improving economic conditions, the future appetite for investment could be limited by China’s deteriorating political relations with the rest of the world and reduced access of Chinese firms to cheap financing.

According to a new report from the Mercator Institute for China Studies (Merics), the value of China’s direct investment in EU countries and the UK declined by 45 % last year to €6.5 billion. Most of China’s direct investment in Europe has involved corporate acquisitions, but greenfield investments totalling €1.3 billion last year exceeded those of previous years. Chinese investment was largely directed at firms involved in transportation, construction and infrastructure, ICT and electronics. In a sharp drop from many previous years, only 18 % of Chinese FDI came from state-owned firms. In 2020, 30 % of Chinese FDI went to Germany, 13 % to Poland, 12 % to the UK and 10 % to France. Poland’s share is explained by the largest Chinese investment in Europe last year, when the Australian Goodman Group sold its operations in Central and Eastern Europe to the Chinese GLP consortium. Merics figures show China’s cumulative investments in Finland during 2000–2020 amounted to €13.3 billion, a €1.3 billion increase from 2000–2019.

According to the Rhodium Group’s US-China Investment Project, China’s direct investments in the US last year amounted to $7.2 billion. While the value of investment rose by 14 % from 2019, it is still significantly less that in the peak years of 2016 and 2017. The share of greenfield investment remained small, and China’s acquisitions in the US were increasingly aimed at consumer products and services, as well as the entertainment industry. The number of investments remains small, so the rise in value reflects the price tags of major acquisitions such as the $3.3 billion paid by Tencent for a stake in Universal Music Group. The report also noted that last year several Chinese firms divested their US holdings. The most significant sale was the now-bankrupt HMA Group’s divestment of Ingram Micro to US-based Platinum Equity for $7.2 billion.

According to the China Global Investment Tracker (CGIT), China’s total outward FDI last year amounted to $30.5 billion, a 66 % decline from 2019. CGIT tries to register all foreign investment by Chinese firms with a value of at least $100 million. Merics estimates that Chinese corporate acquisitions abroad last year fell by 45 % to around $28 billion. The trend diverges considerably from the figures released by China’s commerce ministry, which show outward FDI fell by just 3 % last year to $133 billion (BOFIT Weekly 8/2021). Commerce ministry figures for January-May 2021 show that the outward FDI flow increased by few percent compared to the same period in 2020.

According to UNCTAD’s World Investment Report 2021, global FDI flows contracted by 35 % last year to their lowest level since 2005. China was among a handful of countries that saw its FDI inflows increase last year. China was the world’s largest FDI investor last year and the second largest FDI recipient after the US. The UNCTAD figures for China are based on commerce ministry data. UNCTAD expects global FDI flows to increase by 10–15 % this year and another 15–20 % next year. 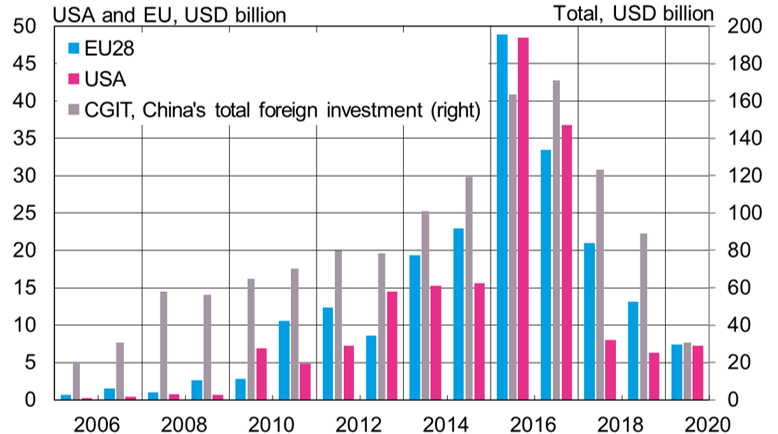