On Thursday (Jul. 1), the Communist Party of China (CPC) celebrated the 100th anniversary of its founding. The CPC was established during the time of the Republic of China (1912–1949), eventually seizing power in mainland China after defeating the nationalist Kuomintang party in a civil war that ended in 1949. The CPC became the unitary political force in China, fully entwining the interests of state and party.

China is now the world’s largest economy if GDP is adjusted for purchasing power parity (PPP) according to IMF statistics. Much of China’s economic achievement is the product of reforms adopted after 1978 and an “open-door” policy that helped China integrate with the rest of the world. This huge change was preceded by roughly one-and-a-half centuries in which the Chinese economy struggled under imperial, republican and communist power. During the end part of the Qing or Manchu Dynasty, China’s economy was held back by weak administration, war, as well as Western and Japanese colonialism. This led to social unrest, revolution and the establishment of the Republic of China in 1912. During the time of the Republic of China, economic development was hindered by political instability, a Japanese invasion, civil war and an episode of hyperinflation. The People’s Republic of China attempted to modernise its economy by adopting a command-economy system focused on heavy industry. However, neglect of agriculture led to a great famine during the “Great Leap Forward” campaign (1958–1960). During Mao Zedong’s rule, the economy took a back seat to political campaigns and purges of political dissidents.

With Deng Xiaoping’s reforms of 1978 and the introduction of the open-door policy, China embarked on a growth path unmatched in human history. Due to the very low starting point, China was able to sustain GDP growth averaging over 10 % a year until the 2010s. Growth thereafter slowed, but even with the covid-19 pandemic rocking the global economy, China posted positive economic growth in 2020. China’s economy has benefited from following an industrialisation strategy driven by exports of consumer products that mimicked the approach taken earlier by the Four Asian Tiger economies (Hong Kong, Taiwan, South Korea and Singapore). Under this export and rapid industrialisation approach, gains in human capital and technological capability provide a ladder that allows firms to ascend to increasingly demanding technology-based industries. Even with successful pursuit of this strategy, however, China’s GDP per capita is significantly smaller than that of the Four Asian Tigers.

Xi Jinping, who has led the Communist Party and the country since 2012, has overseen China’s emergence as a major player in the global economy, with outreach coming e.g. in the form of financing to developing nations for infrastructure projects. The rise of China has fuelled nationalism on China’s part as well as international tensions, particularly with the West. During the Xi era, China’s political climate has become more regimented. For example, power within the CPC has been increasingly concentrated under the rubric of fighting corruption. Crushing terrorism has been used to justify the increased repression of the Muslim population in Xinjiang province. Hong Kong’s long-standing political freedoms were curtailed significantly on July 1, 2020, when new security laws for the special administrative region went into effect. The 14th five-year plan, approved in spring 2021, largely assumes few changes to the existing economic policy framework, but increases efforts at national self-sufficiency (BOFIT Weekly 12/2021).

China has historically played a major role in the global economy 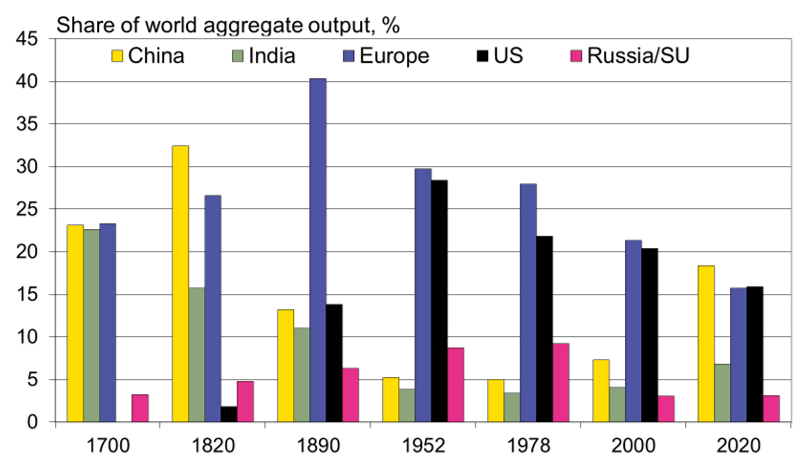