Share prices on Chinese stock exchanges in the first half of this year have given a generally flat performance relative to last year and the rest of the world. After rising in the first two months of this year, share prices plunged in March and were followed by a lacklustre second quarter. On Wednesday (June 30), stock indices in mainland China (CSI 300) were at about the same levels as in early January. In contrast, share prices in emerging markets (MSCI EM) were up about 7 %. In the US, the S&P 500 was up by 14 %, while Japan’s Nikkei 225 was up 5 %. The FTSE All World global stock index was up by 13 % from the start of the year.

The net purchases of Chinese investors (purchases minus sales) via the Stock Connect programme, which links mainland exchanges with Hong Kong, soared to record levels in the start of this year as capital was exported from mainland China, especially to buy shares of Chinese firms where sanctions prevented American investors from trading or owning (BOFIT Weekly 02/2021). Share-buying have since levelled off, and the purchase volumes roughly matched sales in June. Nevertheless, as much as 500 billion yuan (€65 billion) in mainland China investment assets flowed to the Hong Kong stock exchange between January and June. Last year, net purchases had already reached a record 680 billion yuan.

To some extent, the diminishing interest in the Hong Kong stock exchange is the product of investigations by Chinese officials into large technology firms for possible violations of cartel and antitrust laws (BOFIT Weekly 18/2021). Increased oversight has decreased the market value of large technology firms, which has been directly reflected in share prices e.g. on Hong Kong’s Hang Seng index. During April-June, there were no IPOs of mainland China tech firms in Hong Kong. Their share of IPOs on mainland China exchanges has also dropped off significantly. Despite of ongoing antitrust investigation, the Chinese ride-hailing services company Didi, nonetheless, raised over $4 billion in its IPO late June on the New York Stock Exchange. It was the largest international IPO in the US since the 2014 listing of the e-commerce giant Alibaba, which raised over $25 billion.

Despite the political tensions between China and the West and the talks about US-China decoupling, European and American asset management firms are showing increased interest in the Chinese market. For example, US-based Goldman Sachs, BlackRock and JPMorgan have announced they are in negotiations on initial cooperation agreements with mainland Chinese banks. Similar agreements have been penned by European firms such as the French Amundi and the British Schroders. Under these agreements, foreign actors can offer their own asset management products directly to customers of Chinese banks.

Over 220 billion yuan (nearly €30 billion) in assets of foreign investors flowed into mainland China stock exchanges during the first half of this year via Stock Connect. The first-half sum matches that of the entire 2020 total. 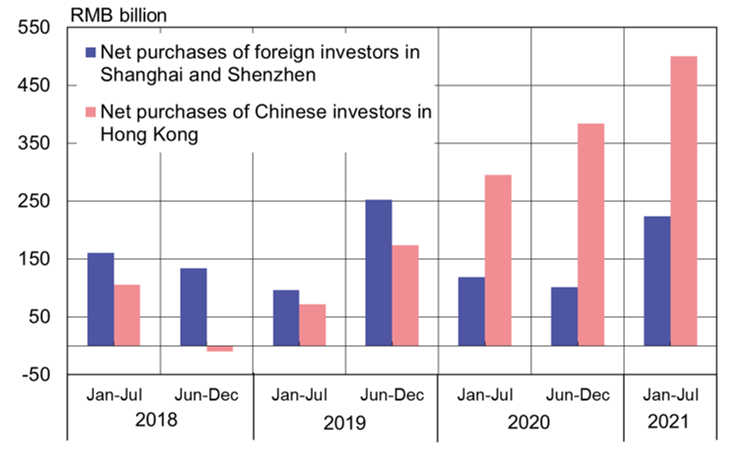