Revenues from special taxes levied on the oil & gas sector (i.e. production taxes and export duties) were still about 10 % lower than in the first quarter of 2020. Crude oil production – and crude oil exports in particular – were held well below the levels of a year earlier due to weak international demand and the OPEC+ agreement on production cuts. The export price of crude oil was also still a few percent lower than 12 months ago as it lags global market prices which were already substantially higher than a year ago.

Other budget revenues have increased well. In the first quarter, other revenues were up by 13 % y-o-y, rising nearly as fast as in the final quarter of 2020. Due to the economy’s slow recovery, however, certain types of major taxes such as mandatory social contributions of employers on worker wages, labour income taxes and corporate profit taxes only increased by a few percent in the first quarter, barely keeping pace with inflation. The rise in the first quarter actually had some special features. Revenues from value-added taxes were up by about 25 %, which may partly reflect further improvements in tax collection. In addition, budget revenues got rather large support from the CBR’s final payment of the surplus generated from the sale of its stake in Sberbank to the government last year, as well as large settlements paid to the government for major water pollution damages.

Increases in consolidated budget spending have slowed since the strong stimulus packages in the first half of 2020. Nevertheless, spending still grew in the first quarter of this year by 9 % y-o-y, which was only slightly lower than in the second half of 2020. Targeted spending to various branches of the economy in particular and also the housing sector came back with a rise exceeding 30 % y-o-y. Growth of other social support spending than pensions soared last year at a near 40 % y-o-y pace, yet it still increased by over 20 % y-o-y in the first quarter. A clearer slowdown was seen in health care, where on-year spending growth was a clip over 10 % after hitting 30 % last year. As last year, spending on education and domestic security & law enforcement increased by a fairly moderate 5−7 % this year.

The rise in budget expenditures in the first quarter of this year did not reflect moves towards the government’s policy guidelines of last autumn, whereby spending growth was to be kept this year to a couple of per cent to reduce the budget deficit. Given the rise in budget revenues and oil prices well above the guideline’s assumptions, Russia can reduce the consolidated budget deficit and at the same time maintain higher spending growth this year than set out in the guidelines. Indeed, the consolidated budget showed a notable surplus in March. This brought the 12-month deficit from rather deep levels seen in the two previous months back to the figure of late last autumn, i.e. about 4 % of GDP.

In his parliamentary address this spring, president Vladimir Putin stressed the need to increase certain forms of social support. Finance minister Anton Siluanov noted that all of the proposed increases have been taken into consideration in the current federal budget. Regional budget spending could be increased somewhat compared to the above-mentioned policy guidelines with the intended release of federal funds to regions as long-term loans to finance infrastructure development. Any revised government budget policy guidelines not been released. 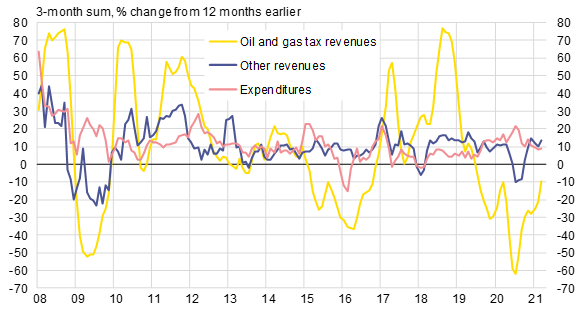