Supported by a recovery in demand, the value of goods imports rose 14 % y‑o‑y in the first three months of this year. Goods imports have already exceeded their pre-pandemic levels. The recovery was led by the machinery, equipment & vehicle category, which accounted for nearly half of all imports. The value of machinery & equipment imports rose by roughly 20 % y-o-y. This was supported by rapid recovery in fixed investment and robust construction activity throughout the crisis. Figures from the Association of European Businesses (AEB) show that sales of new construction machinery in Russia rose by nearly 30 % y-o-y in the first quarter of the year. Sales of new passenger cars rose nearly as fast during January-April. The number of passenger vehicles imported in the first quarter was up by nearly 50 % from a year earlier. Among other major import items, the value of e.g. pharmaceuticals imports doubled. Imports of several foodstuffs also rose rapidly and import volumes of e.g. sugar and vegetable oil doubled. Prices of these products in Russia have soared in recent months, due largely to poor domestic crop harvests last autumn.

The rise in imports has been fuelled in part by a recovery in Russian export earnings. The value of Russian goods exports increased by 3 % y-o-y in January-March. Exports were supported by a strong recovery in global commodity demand in response to strong stimulus efforts in many countries. While the volume of Russian crude oil exports declined by 20 % y-o-y in the first quarter, export volumes of natural gas, certain metals, grains and raw timber grew briskly. Commodity prices have rebounded sharply with the recovery in global demand. The average price of Urals oil, Russia’s top export, hit USD 60 a barrel in the first quarter, more than 20 % higher than in the first quarter of 2020. World prices for metals, grains and raw timber have increased even faster than oil prices. Russia has even imposed temporary export quotas and increased export duties on certain items (e.g. wheat and maize) and is considering more (e.g. certain kinds of raw timber and scrap metal) in order to rein in price increases on the domestic market. 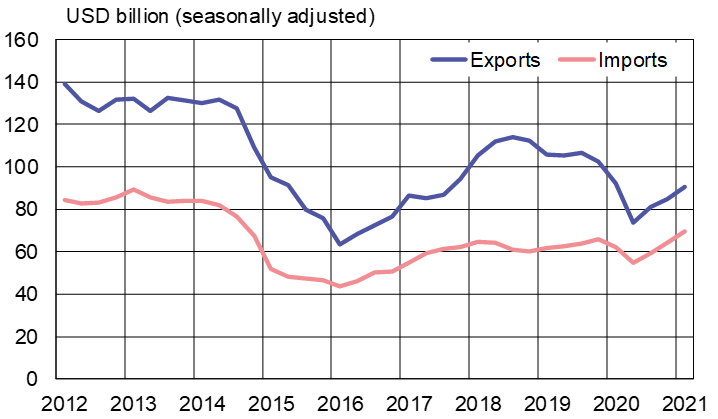