The price of Urals-grade crude oil almost touched the $70 mark in early March, but has since settled back to near the $60 level. Since November last year oil prices have almost doubled, but the RUB-USD exchange rate has remained fairly constant at around 75 rubles to the dollar. The poor growth outlook along with forex-buying according to the government’s fiscal rule and geopolitical tensions have dampened appreciation pressure on the ruble. In recent weeks, the ruble has weakened sharply against the dollar. Much of this appears to reflect heightened tensions with the West and the latest round of sanctions announced by the US on Thursday (Apr. 15).

When oil prices collapsed in March 2020, the ruble weakened to a level of nearly 80 to the dollar. With the situation stabilising and rising oil prices, the ruble appreciated last summer. The Russian currency faced renewed downward pressure in autumn as uncertainty surrounding emerging markets, political unrest in Belarus and the poisoning of opposition politician Alexei Navalny weighted on the ruble. At the end of September, the CBR forex sales and the issuance of guidance to large state-owned enterprises on their forex positions calmed the situation somewhat (BOFIT Weekly 41/2020).

The combination of a weak ruble and high oil prices has been a boon both for the Russian government’s finances and large commodity-exporting firms. On the flip side, the weak ruble drives up import prices, which erodes the purchasing power of Russian consumers. It could also slow growth of already beleaguered domestic fixed investment. Rising uncertainty drives ruble’s depreciation and diminishes the interest of international investors in the Russian market. The share of foreign investors holdings in Russian government ruble-denominated bonds fell to 20 % in March, a level not seen since 2015. In February 2020, that share was still 35 %. 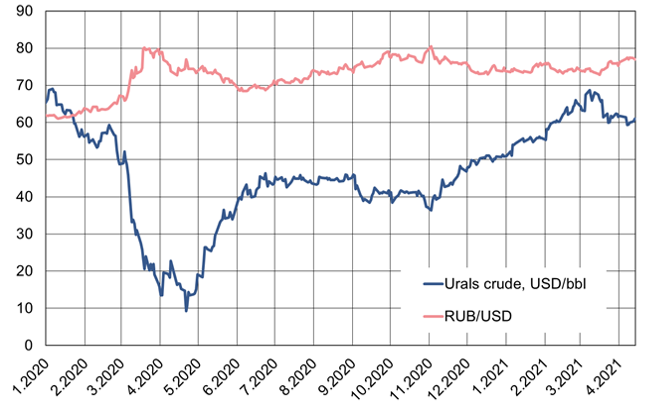