The figures released by the National Bureau of Statistics last week show that GDP in the first quarter of 2021 rose by over 18 %. Such high on-year growth is hardly a surprise as the reference basis was China’s weakest quarter at any time during the covid crisis.

One way to get a better overall picture of the situation is to consider GDP growth in January-March compared to the previous quarter (October-December). The NBS reports that GDP grew by 0.6 % q-o-q in the first quarter adjusted for seasonal variations including holidays (2.4 % annualized rate). Quarterly growth was clearly lower than in the second half of 2020, when it was around 3 %. Quarterly growth of less than 1 % is rare in China. Before the covid crisis, such an episode was last seen at the late 1990s.

A second way to get a better overall growth picture is to see how much GDP has grown compared to pre-covid times. If the situation is compared to the first quarter of 2019, the volume of Chinese GDP is more than 10 % higher in the first quarter of 2021. Even with the pandemic, China has managed to grow at an average rate of 5 % over the past two years. China recovered quite quickly from its January-March 2020 output collapse. GDP is now already 6 % higher than at the end of 2019.

Excluding the covid collapse, China’s most recent quarterly GDP growth was weakest in over 20 years 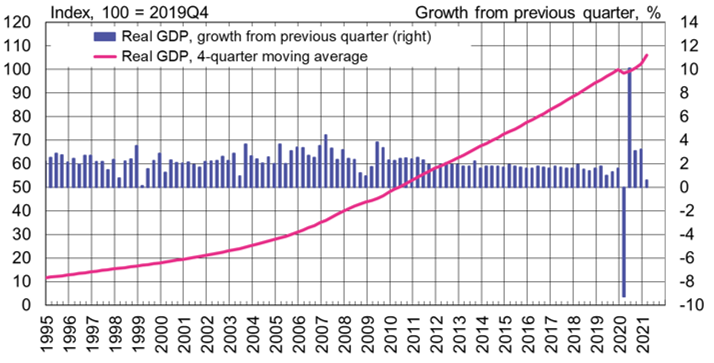