On April 23, the Central Bank of Russia raised its key rate by 50 basis points to 5 %. In its previous rate hike a month earlier, the CBR raised the key rate by 25 basis points. With the rate hikes, monetary stance has shifted from accommodative into the neutral range (key rate 5–6 %).

The CBR indicated the hike was mainly a reflection of rising consumer prices. Consumer prices were up by 5.2 % y-o-y in January and 5.8 % in March. Inflation has accelerated due to a recovery in domestic demand, rising food prices, cost pressures on firms from higher commodity prices and supply disturbances caused by the covid pandemic. The inflation expectations of both households and firms are still elevated.

The CBR kept unchanged its forecast for Russian GDP growth. It sees the economy growing by 3–4 % this year, 2.5–3.5 % in 2022 and 2–3 % in 2023. The CBR added a new feature to its forecast: an estimate of the average key rate during the 3-year forecast period. According the central bank, the annual average of key rate this year should be in the range of 4.8–5.4 %, next year 5.3–6.3 % and 5–6 % in 2023. By publishing its estimate about the average key rate through the forecast horizon, the CBR hopes to increase transparency of its communication and ultimately enhance the efficiency of monetary policy transmission. In its forward guidance, the CBR implied that a further hike in the key rate is possible at upcoming meetings. 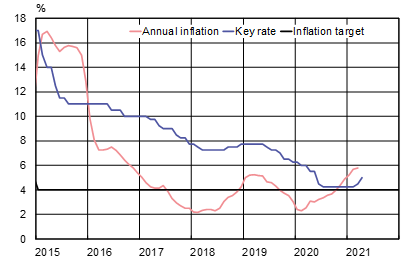