At the end of 2020, the value of Russia’s total international reserves, including gold, amounted to $596 billion. The value of the reserves increased by slightly more than 7 % last year. Most of the growth in value reflects the fact that the reserves are measured in US dollars. The dollar value of reserves increased because gold prices went up and the euro appreciated against the dollar. Central Bank of Russian Federation (CBR) last year intervened sparingly in forex markets, allowing markets to largely define the ruble’s external value.

Russia’s currency and gold reserves are the world’s fourth largest after China ($3.36 trillion), Japan ($1.40 trillion) and Switzerland ($1.08 trillion). Managed exchange rates are an important reason for the large forex reserves of China, and even more in Switzerland’s case. The Bank of Japan, in contrast, allows the yen to float freely. Much of the large forex reserves of Saudi Arabia and Hong Kong can be attributed to their fixed exchange rate policies.

The size of national forex reserves relative to GDP varies considerably across countries. In many large economies, however, forex reserves typically fall in the range of 20–30 % of GDP. For example, the reserves of China and India are about 22 % of GDP, while they represent about 28 % of GDP for Japan and South Korea. Russia stands at a relatively high 41 % of GDP, but it is still a far from joining the group of countries with reserves exceeding a year’s worth of GDP: Singapore (107 % of GDP), Hong Kong (144 %) and Switzerland (153 %).

At the end of June 2020, the value of Russia’s gold assets included in its international reserves surpassed the value of US dollar assets. The value of reserves totalled $561 billion as of end-June. Of that, about 30 % was held in euros, 23 % in gold and 22 % in US dollars. In the second quarter of 2018, the CBR shifted about 15 % of its foreign currency reserves into Chinese yuan (BOFIT Weekly 2019/03). By the end of June 2020, the yuan share of reserves had declined to about 12 %.

The size of international reserves is not necessarily proportional to the size of the economy, USD billion, December 2020 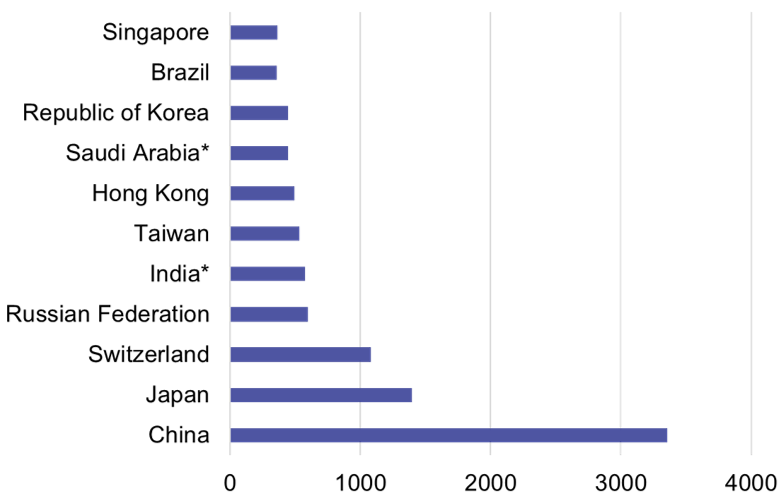