Last spring the drop in oil prices and the collapse of international financial markets were reflected immediately on the Moscow Exchange. In the second half of 2020, interest in exchange-traded shares re-emerged, driving the ruble-based MOEX Russia Index to historical highs at the end of the year. The ruble’s depreciation last year, however, kept the widely used dollar-based RTS Index rather flat for the duration. At the start of January 2021, the RTS Index was still down about 10 % from a year earlier.

As earlier, foreign investors accounted for about half of all share trading volume last year (45 % in December). The market capitalisation of the Moscow Exchange and trading volume growth have been supported by increased interest from small domestic investors. At the end of 2020, 8.8 million Russians had set up investment accounts, an increase of nearly 5 million accounts from the end of 2019. Private individuals represent an increasing share of trading volume, which reached 44 % in December (37 % in December 2019). The eagerness of private individuals to invest their assets in the stock market was driven in part by declining bank deposit interest rates and a change in tax treatment of bank deposits, as well as increased availability of online financial services. Three large commercial banks (Tinkoff, Sberbank and VTB) manage the lion’s share of investment accounts of private individuals in Russia.

After a two-year break, the Moscow Exchange last year held two major IPOs. The first was the IPO of the maritime shipping giant Sovcomflot, the first listing of a state-owned firm since 2013. The second IPO featured Samolet, one of Russia’s biggest residential real estate developers. The October IPOs of Sovcomflot and Samolet raised 43 billion rubles ($550 million) and about 3 billion rubles, respectively. The amounts raised, however, were modest compared to the amount raised by Russian online retailer Ozon in its US IPO (about $990 million) in November. The previous billion-dollar class Russian company IPO in the US was the Netherlands-registered Yandex in 2011.

The Moscow Exchange is characterized by the large weight of oil & gas companies, the miniscule role of domestic institutional investors (e.g. pension funds) and the small share of publicly traded shares. On average, the free float of top 50 companies is about 30 percent. 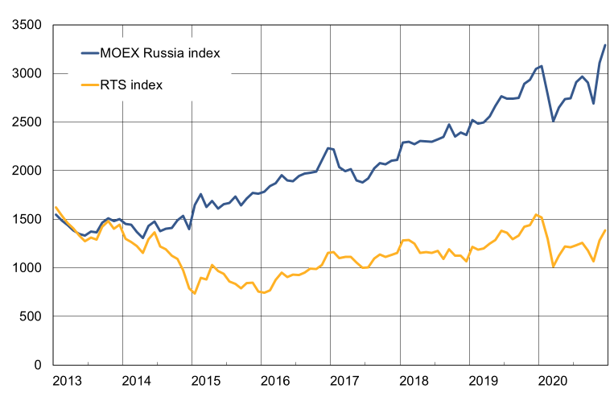