China has spent recent years “battling” poverty, specifically elimination of “absolute poverty” by the end of 2020. The government’s specific goal has been to lift the average per capita income in all of China’s 2,851 counties above 4,000 yuan a year (about 500 euros). In certain wealthy provinces, the target was set a bit higher (e.g. Jiangsu 6,000 yuan or 750 euros). China’s National Bureau of Statistics announced in November that every county had average incomes exceeding the poverty threshold, and in December, President Xi Jinping declared a major victory on eradication of poverty.

China’s average county-level poverty definition diverges radically from internationally accepted definitions based on individual income levels, however. The average conceals much of individual extreme poverty, as income disparities also within counties are large. The widely used World Bank definition on extreme poverty is people living on less income than $1.90 per day, which makes around 4,800 yuan per year (660 euros), 800 yuan more than China’s county average target.

A variety of measures have been used to lift the average income levels in the counties, which had average income less than 4,000. Some direct support has been given to these counties, but local authorities have sometimes resorted to measures less welcomed by the poor. For example, officials have moved destitute persons from poor counties to richer areas, which has the immediate effect of raising the average income level of everybody else remaining in the county. The long-term sustainability of such measures has been widely questioned. Criticism has also arisen from the fact that efforts to eliminate poverty in China have focused solely on the poorest counties rather than dealing with poor people throughout China.

In any case, China’s rising affluence and improved living standards are indisputable. For example, China has made significant gains in the UN’s Human Development Index (HDI) over the past 30 years. The HDI considers such factors as life expectancy at birth, expected and actual years of schooling, as well as living standards, i.e. purchasing-power-adjusted gross national income (GNI) per capita. In the latest HDI assessment, China ranked 85th out of the 189 countries surveyed. China performed well with respect to average in life expectancy (77 years). However, while China’s average living standard fits well with the country’s ranking, it conceals massive income disparities. The World Bank estimates that Chinese income differences using the rough Gini coefficient measure are larger than in either Russia or India – and the World Bank’s estimate for China is even more modest than China’s own official estimate. 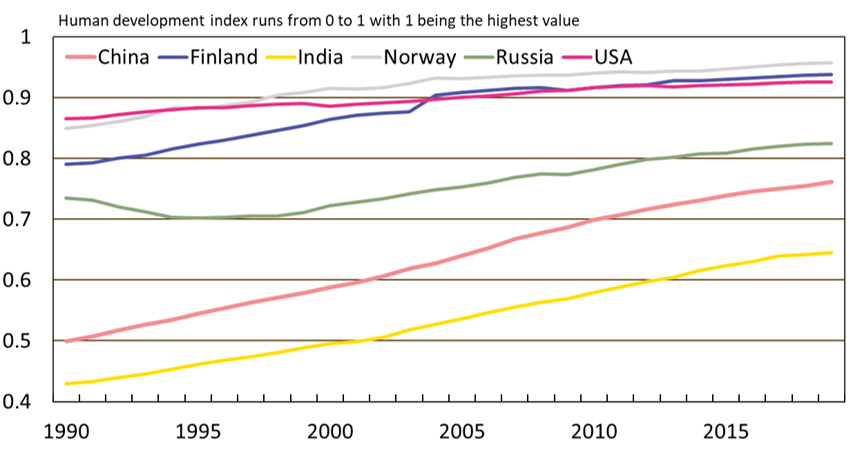