Real household incomes fell by over 8 % y-o-y in the second quarter. In the third quarter, the on-year drop was still nearly 5 %. The fall is the deepest since 2015−2016, when high inflation significantly eroded nominal income gains. The 3−3.5 % consumer price inflation experienced this year has also for its part held down the growth in real incomes. Additionally, the covid restrictions affected the second quarter which saw an exceptional slide also in nominal incomes.

An even steeper decline in household incomes this year has been avoided thanks to substantial increases in social support paid out from state social funds’ budgets. That action is part of the government support measures called for by president Vladimir Putin early last spring. In this respect, the actions resemble the 2009−2010 stimulus, but the hikes in social supports this time have not focused on pensions but rather other forms of social assistance to e.g. families with children. Rosstat figures for household incomes show that social supports accounted for nearly 20 % of total household income in 2019.

Part of the wage sum slide is due to a drop in the number of employed, which has occurred even slightly more severely than in big recession of 2009. In addition, layoffs and shifts to part-time work have increased. According to Rosstat’s labour force survey, this year’s decline in the number of persons employed has taken place especially in the grey economy, a pattern similar to earlier economic downturns. In contrast, there has been rather small decline in employment as a whole in the non-grey parts of the economy (for which much better data is available). In these fields, the average wage has risen even in real terms in the current recession, which is different from the recession-plus-inflation years of 2009 and 2015. The differences across branches are very large, however. Real wages of the private sector in core sectors of the economy such as industry and trade have fallen, while wages in large public-sector branches such as state administration and education – and health care in particular – have been adjusted upwards at a rapid pace. 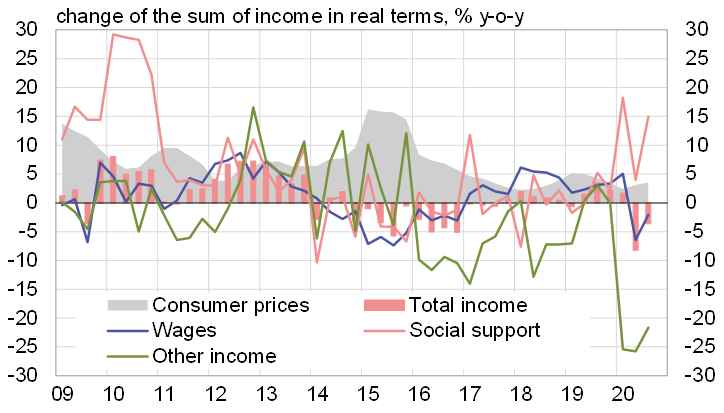