As a consequence of the economic recession caused by the coronavirus pandemic, Russia’s government sector surplus has turned to deficit. This year’s deficit is expected to reach about 4.5 % of GDP. Most of the deficit will be covered by domestic government borrowing. In recent months, the finance ministry has successfully placed huge issues of ruble-denominated bonds. There has been strong demand for new government bonds, especially by Russian banks. Consequently, the share of foreign investors in Russian government bond markets has diminished slightly.

On October 28, the finance ministry successfully issued a historically large (430 billion rubles) 9-year variable-rate bond. On November 3, the government issued a nearly-as-large 10-year variable-rate bond. Issues of fixed-rate long-term bonds, which have been much smaller, have seen their yields rise above 6 %. Future bond issues for the rest of this year are expected to be much smaller as the 4Q borrowing target of 2 trillion rubles has essentially been reached. At the end of September, domestic debt of the government amounted to about 12 trillion rubles, which is about 25 % more than a year earlier. Government foreign debt at the end of September was valued at around 60 billion dollars (about 4.8 trillion rubles). The Russian government’s debt burden is modest by international standards. Despite ongoing borrowing, Russia’s government debt-to-GDP ratio under the finance ministry’s guidelines in not expected to exceed 22 % in coming years. 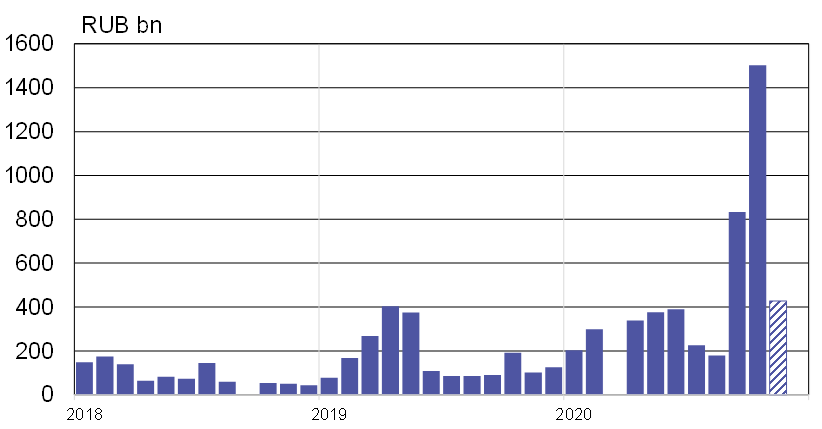 *) The November 2020 column shows value of debt issues as of November 5.