The number of confirmed coronavirus cases in Russia has climbed steadily since early September. In the first days of November, the number of reported cases already exceeded 20,000. At the end of August, the number of daily cases was still less than 5,000. Notably, the number of reported covid cases has increased significantly faster in many other European countries. The Russian healthcare system has been stretched by the rise in cases requiring hospitalisation and ICU care. In many Russian regions, the quality and availability of medical services was already quite poor. Daily death tolls this week have approached 400.

The willingness of Russia’s political class to expose themselves to covid is a remarkable aspect of Russia’s handling of the pandemic. As of end-October, at least 91 of the 450 Duma deputies had contracted covid. About a third of regional governors have also come down with covid. The infected-politician phenomenon has been particularly common in regions east of the Urals. Even prime minister Mikhail Mishustin had covid in May.

While officials have not significantly tightened covid restrictions in recent weeks, Russians have voluntarily restricted their movements and consumption habits in response to the increased numbers of covid cases. Payments data from Sberbank suggest that consumption was down by about 10 % y-o-y in the final week of October. In the previous week, the on-year drop was just 0.9 %. In particular, consumption of services contracted by about third from a year earlier. Payment transaction figures released by CBR show that the volume of payments in industrial branches had recovered to the level of previous years at the end of October. In recent weeks, however, economic activity has again slowed in many service branches. Among industrial branches, the performance of oil production and refining have been quite unusual, which is partly a reflection of depressed oil prices and partly due to production cuts under the OPEC+ agreement. 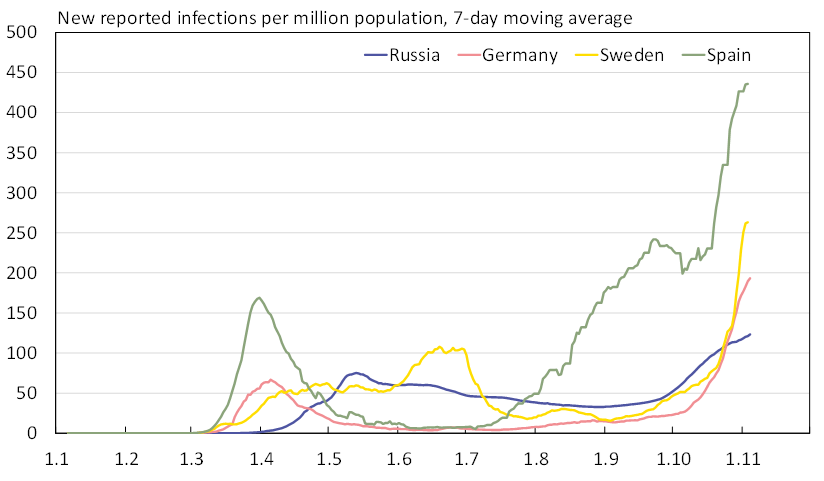