The number of new confirmed covid-19 infections in Russia has risen clearly since early September. Yesterday, the daily recorded number of new cases exceeded 17,000, while during the first wave of infection in April-May, the number of confirmed cases ranged from 10,000 to 11,000 a day. The number of registered deaths from the coronavirus has risen to new heights, and presently exceed 200 a day.

With the increase in confirmed cases, Russia finds itself in a situation similar to many countries in Europe. On the other hand, there has so far been no large appetite for extensive measures as now seen in Europe that would curtail business or people’s freedom of movement.

Instead of nationwide restrictions, local officials have taken targeted approaches to dealing with local situations. Mask use is mandatory in many public spaces and on public transport. The autumn break for Moscow schools has been extended, and when the break is over, upper-grade students continue to take their classes online. In St. Petersburg, where restaurants must now close by 11 pm, every customer in principle must provide their contact information to the restaurant. Such measures are hoped to be sufficient to slow the spread of the epidemic until vaccines become available on the markets.

A recent survey of small and medium-sized firms by Magram Market Research and Promsvyazbank found that a third of responding firms said that they would go out of business if Russia declared significant restrictions on movement lasting longer than three months. This at least partly explains the unwillingness of officials to impose excessive measures. It is worth remembering that this year Russian GDP has contracted the least of any European county (BOFIT Weekly 2020/41), a reflection of the Russian economy’s structural resilience in the midst of a pandemic. 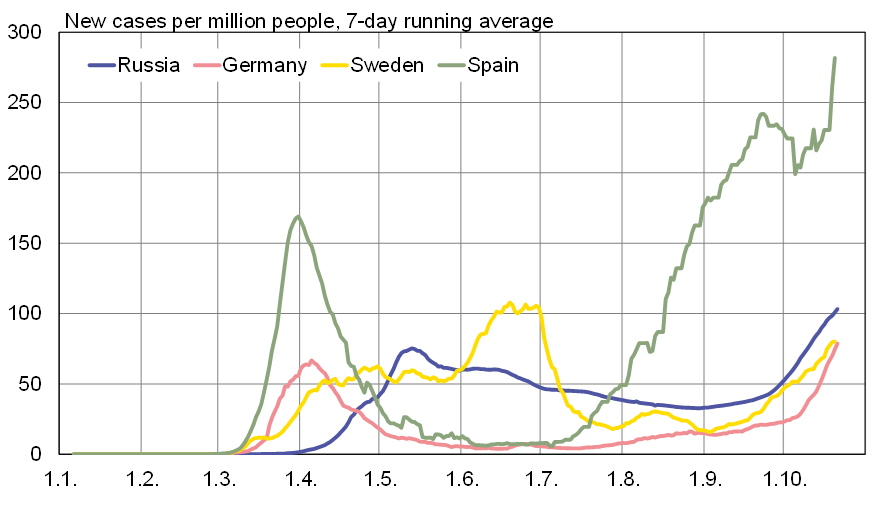