Preliminary Central Bank of Russia balance-of-payments figures show that Russian earnings on exports of goods and services were down by nearly 30 % y-o-y still in the third quarter. The figure of decline was slightly smaller than in the second quarter. Revenues from exports of oil, petroleum products and natural gas were still down by almost half from what they were a year earlier. Revenues on exports of other goods, in contrast, have declined just a few percent this year overall, and were fairly close to where they were in the third quarter of 2019. Earnings on services exports have contracted by almost 40 %, especially on the collapse in tourism revenues.

Russian spending on imports of goods and services in the third quarter was still nearly 25 % less than year ago. Goods imports, however, edged towards recovery, and were in September 2020 already close to the September 2019 level. Services imports in the third quarter remained down by more than half from a year earlier, and even September’s performance did not bring much relief to the situation. Russian spending on travel abroad (more than one-third of services imports in 2019) was still down by 90 % y-o-y and imports of other services were down by nearly 25 %.

As export earnings have dropped substantially more than spending on imports, Russia’s current account surplus has been exceptionally small for the past six months. The four-quarter surplus shrank in the third quarter of this year to less than 2.5 % of GDP.

The financial account balance between Russia and the rest of the world has been distinctly in deficit this year, which has caused the ruble’s exchange rate to depreciate. Unlike domestic sources to finance the government’s budget deficit, investments coming from abroad to Russian government bonds diminished greatly in 2019. The net outflow of private capital from Russia has been considerable. The foreign liabilities of banks, which currently consist mainly of foreign deposits and bank accounts, continued to decline in the third quarter as they have for years (excluding impacts from changes in the ruble’s exchange rate). Banks have also reduced their foreign receivables. The net capital outflow from the Russian corporate sector increased in the third quarter to the extent that the four-quarter net outflow amounted to nearly 2.5 % of GDP – the largest outflow recorded in five years. Much of this was driven by the retreat of inbound portfolio investments in the Russian corporate sector and notable outbound flows of portfolio investments from Russia’s corporate sector. Inflows of direct investments from abroad to the Russian corporate sector have declined to a trickle this year. After years of brisk activity, outbound direct investments from Russia’s corporate sector this year have become almost non-existent.

Goods imports to Russia on the road to recovery, while services imports remain down 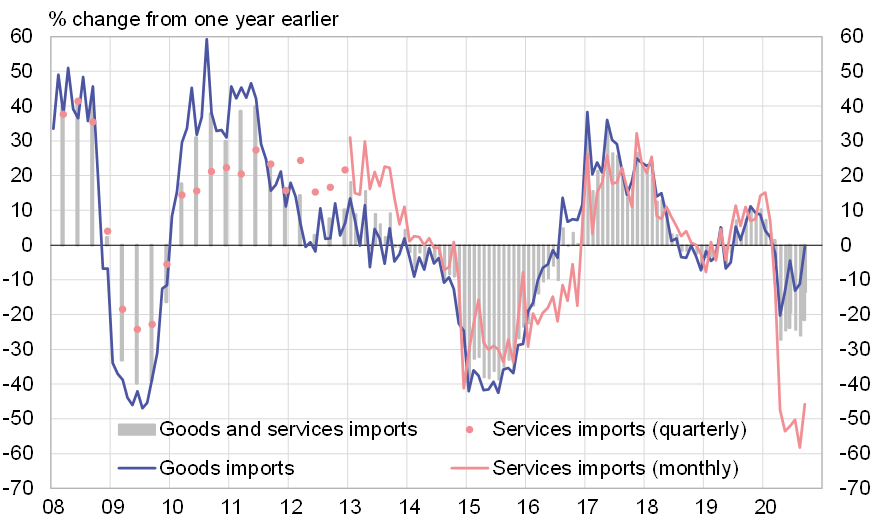