Industrial output was in June down almost as much in on-year terms as in May, with the output drop in both months holding at roughly 9.5 % y-o-y. Industrial output decreased by 8.5 % y-o-y in the entire second quarter.

Drops in output have been seen especially in the mineral extraction sector. Crude oil & natural gas production and related services account for 75−80 % of the extractive sector’s value of deliveries (crude oil production alone counts for over half of all the deliveries). As in May, production of crude oil was down over 15 % y-o-y, due in part to the OPEC+ production ceiling agreement and a large drop in demand for oil, particularly on the domestic market. Natural gas production had been significantly curtailed for several months already. After years of growth, coal production has also contracted considerably this year.

Manufacturing output continued to recover in June, albeit slightly, but was still down by 6.5 % y-o-y. Differences across manufacturing industries were very large, however. Among major branches food processing saw exceptionally high growth in the first quarter due to growth in exports, settling back to more normal growth of 3–3.5 % in the second quarter. Output growth of the chemical industry has remained strong throughout this year without a dip, and production in the pharmaceutical industry has shown fast growth due to the health crisis.

Manufacturing output on recovery path in May and June 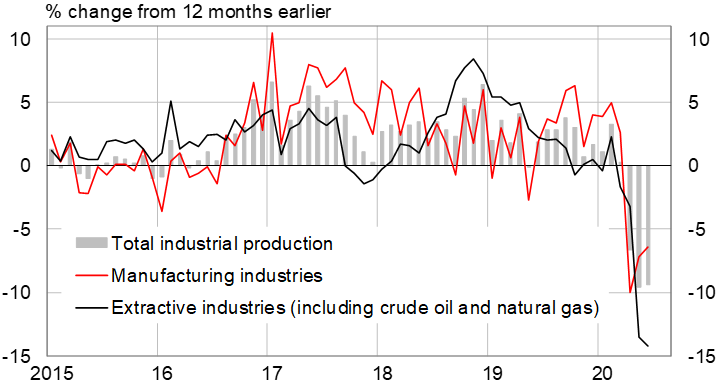