The economy ministry estimates that the 12-month drop in GDP was no longer more grave than 6.5 % from June 2019, following the roughly 11 % y-o-y declines posted in April and May. The easing of coronavirus restrictions contributed to economic recovery.

June household demand recovered from the May level as people returned to work. June retail sales volumes were still down by 7.7 % y-o-y, an improvement from the 20 % drops in April and May. Rosstat estimates that seasonally-adjusted sales volumes were up by around 20 % in June from April, signalling a relatively rapid bounce-back. Even so, retail sales were still down by almost 10 % from the start of the year. The country has a rather long way to go before pre-coronavirus conditions are reached. Food sales saw the strongest recovery, and were only down 3.7 % y-o-y in June. Sales volumes of non-food goods were down by about 11 % y-o-y.

The economic recovery could also be seen in construction activity, which last month recovered to the same level as in June 2019. The contraction in industrial output also eased slightly, but was still down by 9.4 % from a year earlier. The persistence of low oil production levels was reflected in reduced levels of pipeline transmission, which were down by almost 15 % y-o-y in June. Rail freight transport in June was also down by over 4 % y-o-y.

The tough times in the Russian labour market and falling household incomes speak to the depth of the economic crisis wrought by the covid-19 pandemic. Real disposable income in the second quarter decreased by 8 % y-o-y, hitting their lowest level in over a decade. Even if economic activity and household incomes recover in coming quarters, Russian income levels prior to the corona crisis were still below the 2014 level. As incomes have decreased, households have borrowed more to maintain consumption. In the second quarter of this year, lending to households increased by 12.6 % y-o-y. 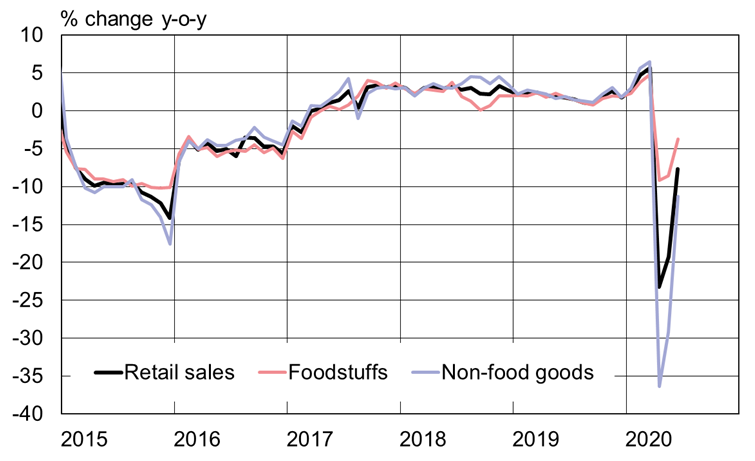