Among individual branches, the net profit of the corporate sector was mostly driven down by fuel wholesale which saw a sharp drop in net profits. Net profit of crude oil production and related services was down considerably, and profits in oil refining and chemical industry evaporated altogether. In the metal industry, profits were down by more than half.

Profitability in all these sectors has been hit by lower export prices and for the oil sector, a sharp drop in domestic prices. The ruble has also depreciated notably less this year than in the 2015 recession, so now profitability in the export sectors has not received a ruble boost of the same magnitude.

Amidst the corona recession, only some branches have experienced higher profits. These very few segments include retail food sales and the pharmaceuticals industry.

Despite lower profitability, the number of companies officially terminating their activity is down considerably this year. Existence of companies has been propped by the government restrictions on corporate bankruptcies introduced with the advent of the corona crisis. The restrictions on bankruptcies are an additional element to various government support measures aimed at preserving stability in the country.

The coronavirus downturn has affected profitability of Russian firms 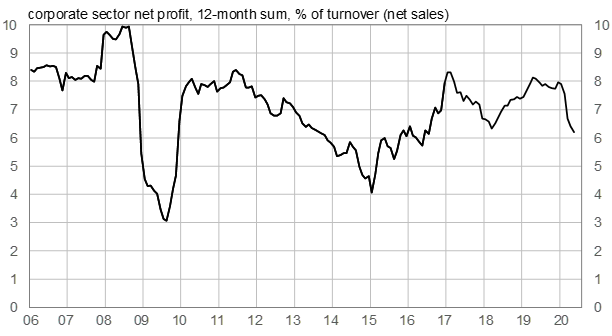