China has gradually eased its coronavirus-related restrictions on movement and activities, declaring the entire country as low-risk for contraction of COVID-19. Companies began to restart operations in mid-March, but the “return to normal” progresses at different paces across provinces and sectors. Regions most affected by the pandemic are experiencing the slowest recoveries.

Industrial firms were the first to start normalisation of operations, so April industrial output rose by 3.6 % y-o-y. Growth was also apparent in the increases in freight volumes, traffic congestion and air pollution. Large state-owned industrial enterprises seem to have recovered faster than small and medium-sized enterprises. In May, the volume of coal consumption at power plants have exceeded last year's volume by almost 10 % which suggests that growth in industrial output continued in May.

Fixed asset investment (FAI) in April was down just 10% y-o-y in nominal terms, a reflection of available capacity and persisting uncertainty about the economic outlook. The strongest recovery was seen in construction-related investment, a sector of the economy targeted for recovery stimulus.

Domestic consumer demand has recovered slowly. After contracting by 20 % y-o-y in January-March, April retail sales were down 9 % y-o-y in real terms. A recent study based on UnionPay payments data found that consumption in the first four months of this year was down by around 27 % y-o-y. Online sales have been affected significantly less than traditional retail. Consumers are shopping again, but they are still reticent about using services. As of end-April, spending in restaurants was still down by 40 % from a year earlier. Shopping malls in China operated at about two-thirds of normal in April. Service businesses are affected by some remaining precautions like testing mask use and social distancing.

The arrival of the early May holiday season marked a turning point in attitudes to intercity travel. The government has even begun to encourage domestic tourism. Long-distance travel (by road, rail or air) is still down by about half normal levels. People clearly avoid public transport, even local transport. The number of metro passengers in China’s nine largest cities is up a bit, but still 80 % below the ridership levels of 2019. Traffic congestion, on the other hand, reached an average May level, highlighting the popularity of using private cars.

The frail economic recovery has been hampered by weak export demand and prudence on the part of consumers and investors. With the rapid recovery of industrial production, the structural shift from industry and investment dominated economic growth to more consumption and service based growth is delayed. 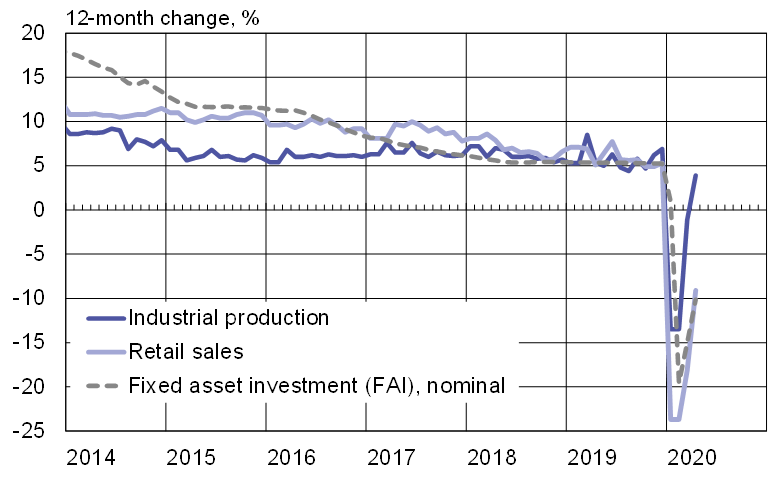