The decision not to set a growth target, even if only temporary and in the midst of a global pandemic, is a welcomed policy change. The fixation on numerical growth targets have long been criticised for incentivising inappropriate economic policies, fuelling indebtedness and maintaining unprofitable “dinosaur” businesses. An abbreviated and postponed version of the annual National People's Congress was held in Beijing on May 22 to 28.

The government's work report presented by premier Li Keqiang listed a number of objectives to guide economic development this year. The report reveals that the government is foreseeing a clearly positive GDP growth for this year. Nevertheless, the long-standing target of doubling the real GDP from 2010 by the end of this year, i.e. the end of the current 5-year plan, will not be achieved. According to president Xi Jinping, the GDP target would have been set at around 6 % without the corona shock.

The corona crisis has highlighted the importance of maintaining employment. China’s survey-based urban unemployment rate this year should be held to around 6 % (last year's target was around 5.5 %). Just over 9 million new jobs should be created, which is well below last year’s target of 11 million and the realised creation of 13.5 million new jobs. Since the number of new jobs is a gross target, it does not take into account lost jobs and tells little about the actual situation in labour markets. The urban employment growth has slowed for years, increasing by just 8 million last year. In the first four months of this year, 3.5 million new jobs were created according to official statistics. Many estimates suggest that tens of millions of Chinese lost jobs at the same time. Therefore the objective of creating 9 million new jobs does not appear particularly optimistic.

China’s planned fiscal stimulus seems quite modest compared to other major economies. Maintaining high growth targets has long required accommodative fiscal policies that has caused the public deficit to skyrocket. The official budget deficit target has been raised from 2.8 % of GDP last year to 3.6 % this year. The calculation of the Chinese budget deficit, however, does not correspond to international practices and fails to reflect the true state of public finances as a large amount of spending occurs off-budget. Off-budget local government spending will rise this year with the authorisation of an increased quota for special bonds local governments may issue (to 3.75 trillion yuan this year from of 2.150 trillion in 2019). In addition, the central government will issue 1 trillion yuan in rarely utilised special bonds. Combined with the announced tax and fee cuts, this year’s fiscal easing is estimated to be around 4 % of GDP.

Chinese fiscal policy has long been focused on channelling money and resources to fixed investment. The role of social spending is marginal, even if this year’s political objectives include the complete eradication of poverty. Personal incomes are expected to grow at the same pace as the economy, i.e. well below the last year’s growth. Although the premier’s speech mentioned “new infrastructure” such as 5G networks and electric vehicles, the need for rapid recovery will likely emphasise more traditional infrastructure investments. With long continued infrastructure boom, however, infrastructure-driven stimulus may provide poor returns and do little to boost future growth potential.

Although efforts have been made in recent years to keep debt growth “roughly” in line with nominal GDP growth, such efforts appear to have been set aside. In 2019, the aggregate financing stock increased by 11 %, while the broad measure of money supply (M2) increased by 9 %. This year, both metrics are expected to grow “much faster than last year," which, together with the collapse of economic growth, will significantly boost the debt-to-GDP ratio. Inflation will be allowed to accelerate slightly. The inflation target has been raised from around 3 % last year to around 3.5 %. The inflation target in China, however, is largely seen as a ceiling for consumer price growth, not an explicit monetary policy target. 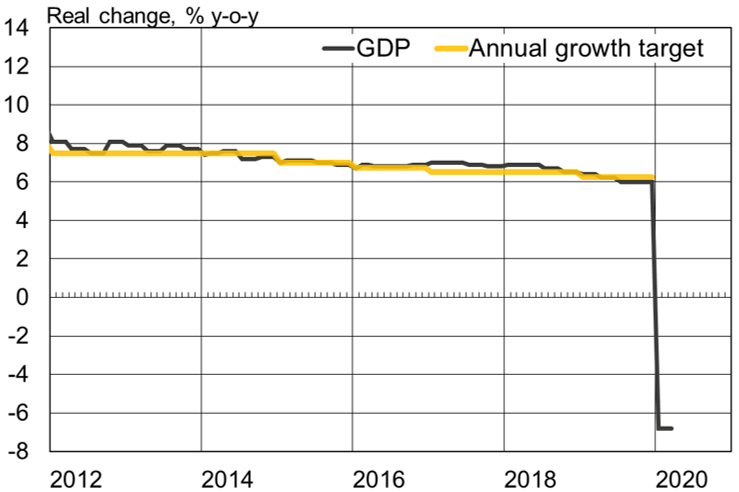