In the name of national security, mainland China has decided to make a set of laws on Hong Kong banning revolutionary movements and foreign influence in the special administrative region. China's intentions have led to large-scale demonstrations in Hong Kong. The US is considering more sanctions for China and said that Hong Kong does not have high degree of autonomy from China anymore. President Trump is giving a press conference on the issue later today. The EU has called on China to respect Hong Kong’s autonomy. The Chinese and Hong Kong governments have tried to play down the meaning of new laws.

The notion of legislating Hong Kong law from Beijing is a violation of the independence of Hong’s Kong’s legal system. An independent legal system has been one of the corner stones in helping Hong Kong become a major international financial centre. There are fears that China’s tightening grasp and possibly following US actions will force an exodus of capital and send foreign companies important to Hong Kong to destinations elsewhere in Asia. So far, the reactions on the Hong Kong Stock Exchange have been rather moderate.

The Hong Kong economy has been in recession since the middle of last year. Factors hurting growth include the slowdown in growth of the Chinese economy, the trade war, wide-spread anti-China demonstrations and the coronavirus pandemic (BOFIT Weekly 20/2020). 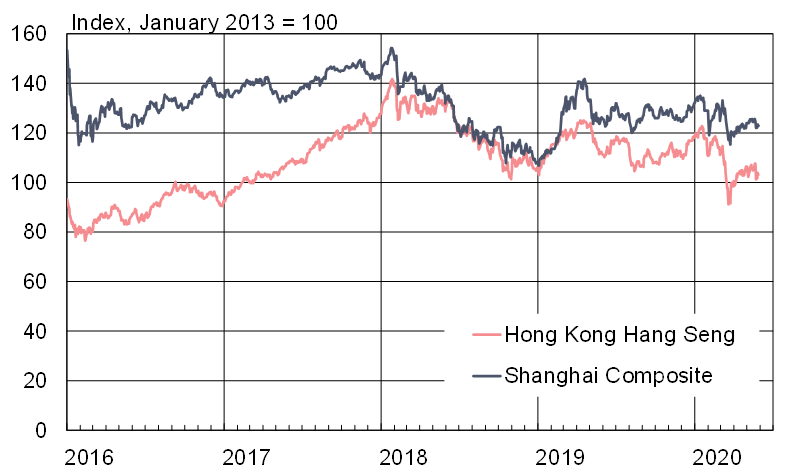