In March, 12-month consumer price inflation remained rather moderate at 2.5 %. However, the month-on-month inflation accelerated to 0.6 %. Especially food prices rose briskly in March (up 1 % m-o-m). It seems likely that prices for foodstuffs and household items were driven up by stocking up by households in anticipation of coronavirus times. Both Sberbank and Romir household payments monitoring report that household consumption spending increased strongly just after mid-March, but declined significantly either in the final week of March or the first week of April. This suggests an easing in acute price pressures.

The collapse of the ruble’s exchange rate seems to have had no large impact on consumer prices. The fastest increases in food prices in March mostly involved domestically produced foods. Imported foodstuffs account for a reasonable quarter of food retail sales. Increase in prices of non-food goods was more subdued, even if imported non-food goods account for about half of such retail sales. The weak ruble is expected to have a relatively moderate impact on prices, even if expectations are subject to unusual uncertainty. Russia’s economic and consumption outlook for the nearby periods has been severely downgraded, increasing the uncertainty of whether consumer price inflation will stay around the Central Bank of Russia’s 4 % inflation target.

Authorities have expanded their actions on the price front. Price controls have been stepped up, particularly for medicines and basic foodstuffs (prices of the most important medicines have already been regulated for a decade). The export of certain medicines, medical equipment and personal virus protection equipment is prohibited. Part of such items are exempt from value-added tax, and imports of selected items are both import duty free and VAT free. The government has set a ceiling on grain exports and the state can intervene by selling grain if their prices exceed the upper limits set for them.

Even more unusual measures have appeared. For example, a major retail chain announced it would start selling socially critical necessities at cost (i.e. purchase price), and invited other retail chains to join in. Russia’s Federal Antimonopoly Service (FAS) has determined that this practice does not violate the Competition Law. In mid-March, the FAS also requested that all institutions, businesses and experts abstain from price forecasts. The FAS said that price forecasts were unacceptable because they could lead to violations of the Competition Law through e.g. high price gouging.

The rise in consumer prices accelerated in March 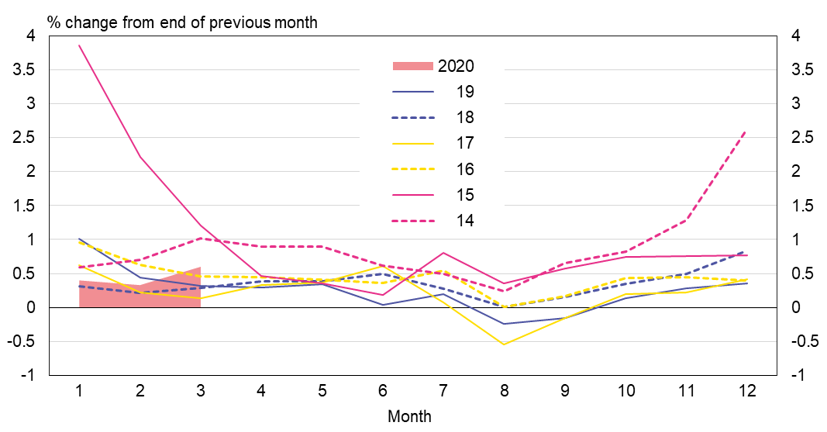