China’s official Purchasing Managers Index (PMI) for manufacturing returned to positive territory in March with a reading of 52.0 (up from 35.7 in February). The March PMI for services and construction was 52.3 (29.6 in February). When a PMI reading exceeds 50, it suggests that, on average, company purchasing managers see their business improving from the previ-ous month. A value below 50, in contrast, means business conditions are getting worse. The jump in the PMI was expected as the government lifted or relaxed many restrictions on movement and other activities, thereby allowing most companies to gradually resume normal operations in March after a horrendous February. Despite the rise in PMI indices, many companies are still struggling to resume normal production. The production figures set to be released in a couple of weeks are expected to show that output in March, as in January and February, was lower than in the same months last year.

The manufacturing PMI shows the employment in the manufacturing sector improved slightly from February to March. In contrast, the employment situation in the services and construction sectors continued to deteriorate, albeit at a slower rate than in February. Even the official unemployment rate of urban areas rose unprecedentedly in February by almost one per-centage point to the level of 6.2 %. The faltering global economy is now restraining China’s recovery. The March PMI showed that over half of responding companies had fewer export orders on their books than in February.

Economic activity is reviving as reflected in the daily indicators for transport, energy use and air pollution. After hitting bottom of February, sales picked up in the important housing market as builders have reopened their sales offices and sub-stantial discounts tempt to dismantle pent-up demand for housing. The situation, however, varies by branch and province.

In Hubei province, ground zero of the coronavirus epidemic, recovery has been slower than elsewhere. Officials neverthe-less report that even in Hubei nearly all industrial companies were back in operation by the end of March, although on aver-age 30 % of workers had yet to return to work. In addition to the labour market situation, there are other obstacles to normal-ising economic conditions, including the lack of demand and gaps in production chains. A survey conducted by the American Chamber of Commerce in China in mid-March found that 35 % of companies were operating normally and 23 % expected their situation would return to normal by the end of April. Thus, it will take time for a large proportion of American compa-nies to recover even if China would be spared a possible second wave of the coronavirus epidemic.

Despite general downward revisions in China’s growth forecasts, there is little consensus on of the size of the first-quarter drop in GDP, the pace of recovery and therefore GDP growth for all of 2020. Under the World Bank’s base scenario forecast published this week, Chinese growth would slow to 2.3 % this year. In its pessimistic scenario, growth remains at zero. In our latest BOFIT Forecast for China, published two weeks ago, we estimate China’s GDP this year will be slightly lower than last year even with a relatively strong recovery. 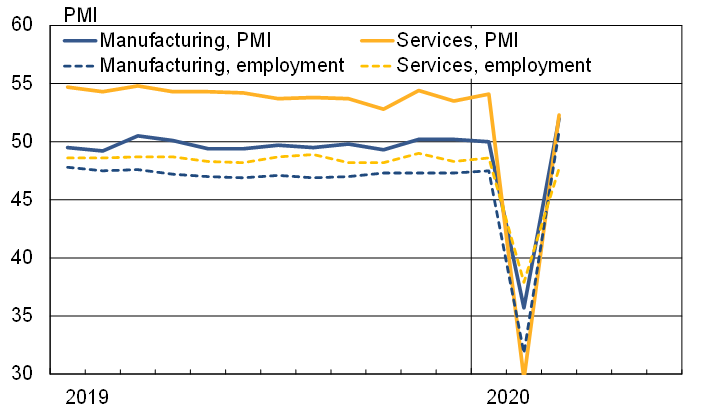