Recent weeks have seen large daily moves in oil prices. For example, the price of Urals-grade crude oil fell by 15 % on April 1 to a record low of $13.50 a barrel, only to rebound by 45 % on April 3. The seesawing prices reflect supply and demand instability and the extreme uncertainty in global markets.

Economic growth has collapsed in many countries as a result of societal efforts to constrain the coronavirus pandemic. Demand for oil has decreased while inventories have soared. As the depth and duration of the economic downturn caused by the coronavirus crisis is difficult to assess, the market continues to experience large daily fluctuations in oil prices. Concerns about additional oil supplies flooding the market have increased of late by the impasse in negotiation of voluntary production ceilings among the OPEC+ group of oil producers. The group’s largest non-OPEC member, Russia, and OPEC’s largest producer, Saudi Arabia, have been unable to agree on how to proceed since the previous agreement expired at the end of March and the need for further cuts has grown dire.

The recent collapse in oil prices seems to have dispelled the reluctance of Russia and Saudi Arabia to resume talks. US president Donald Trump commented last Friday (Apr. 3) that Russia and Saudi Arabia were close to agreement on a new round of production cuts, triggering a sharp rebound in global oil prices. The US and Canada are also discussing the possibility of imposing tariffs on Russian and Saudi oil if the two countries fail to limit production. The OPEC+ group countries (OPEC and a half dozen other oil producers, including Russia) were scheduled to resume negotiations on April 6, only to postpone until at least April 9 over a dispute as to whether countries that are not in OPEC+ will also take part in to the agreement. Even if key oil-producing countries agree on new production restrictions, the impact of production ceilings on oil prices in the midst of a pandemic is unclear.

Declining oil prices pulled down the ruble’s exchange rate in the first quarter of this year. However, the ruble-dollar rate (down 20 % since the start of the year) has weakened considerably less and fluctuations have been much smaller than in the Urals prices, which have declined in dollars 70 % since the start of the year. Since mid-March, the CBR has sold currency in the markets on behalf of the finance ministry which has mitigated ruble exchange rate movements. 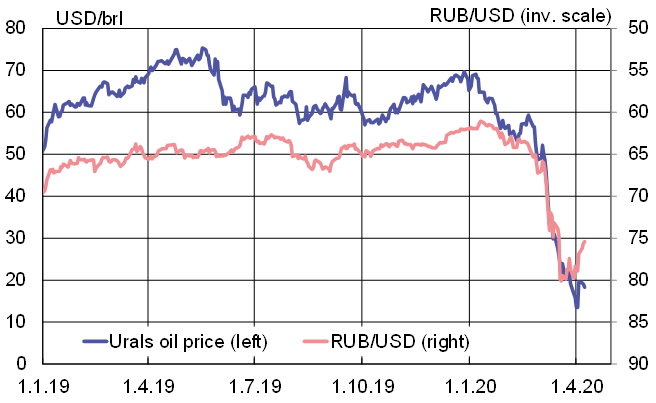