President Xi Jinping announced at the end of last week that the budget deficit will be increased this year. Moreover, the fi-nance ministry will be issuing special bonds and the quota of special purpose bonds for local governments will be further raised. In addition, premier Li Keqiang said this week that the central bank’s support to small and medium-sized enterprises (SMEs) would increase from 500 billion yuan to 1.5 trillion yuan (roughly 210 billion dollars), along with a number of other support funding measures for companies aimed at preventing a wave of bankruptcies and higher unemployment. Targeted additional reductions in bank reserve requirements are also planned. Provincial governments have launched their own sup-port measures. In recent weeks, a number of provinces distributed vouchers to encourage residents to increase consumption.

China’s stimulus response has been more subdued than in many countries. The IMF estimates that the fiscal policy measures before the latest batch only amount to around 1.2 % of GDP. A revised budget for this year has yet to be announced. The budget deficit is set to increase this year even without increasing expenditure because slowing economic growth will reduce government revenues. The IMF estimates that even before the coronavirus crisis the government’s budget deficit already exceeded 10 % of GDP and central government debt amounted to roughly 70 % of GDP.

Monetary policy measures have been restrained. The People’s Bank of China has eased monetary policy during the coro-navirus crisis by lowering reserve requirements and boosting market liquidity. In addition standard policy funding, commer-cial banks have also been granted access to special funding to increase their lending to companies in those provinces hardest hit by the epidemic. Interest rates have only been lowered slightly. MLF and LPR rates were cut by 10 basis points in Febru-ary, while the PBoC’s reverse repo rate was cut by 10 basis points in February and 20 basis points in March. 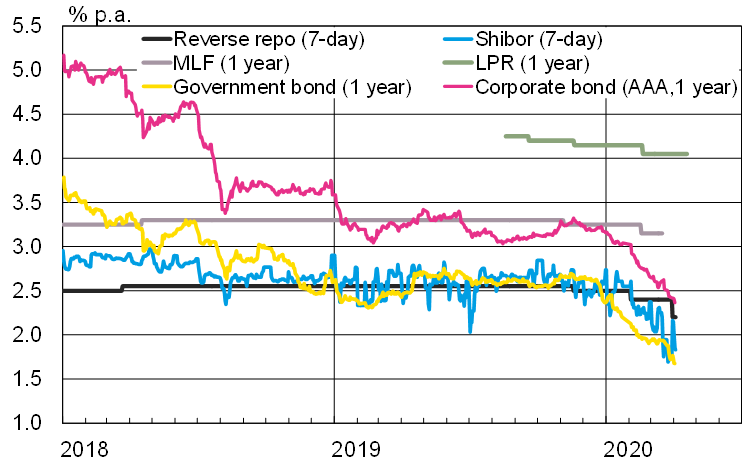