Preliminary balance-of-payments figures show a current account surplus of 59 billion dollars in the July-September period. The 12-month current account surplus has increased to about 1.4 % of GDP. Much of the increase was caused by lower value of goods import and a reduction in the services trade deficit. The change in currency reserves this year has been small. Overall, this translates into an increase in net capital outflows, which is measured as the sum of the financial account and the “net errors and omissions” term in the balance-of-payments accounting.

Later revisions of balance-of-payments data could alter the view on how much capital actually flowed out of the country. Revisions for the first two quarters of 2019 have produced reductions in the current account surplus by nearly 30 % from preliminary estimates. Using the new estimates, the amount of the net capital outflows diminished slightly. In the first half of this year, the outflow of capital was in fact “unclassified” and showed up in the net errors and omissions term which was clearly negative. The combined recorded figures for the capital and financial accounts indicated a small surplus. 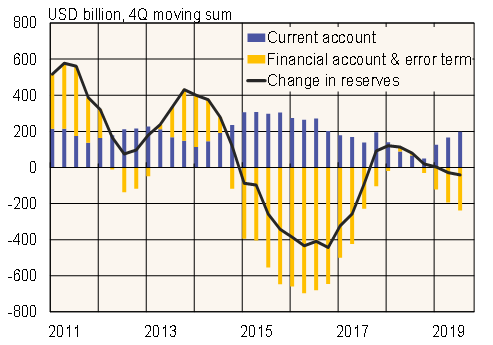