Expenditures of the consolidated budget (federal, regional and municipal budgets, plus state social funds) increased in the third quarter by 13 % y-o-y, pushing growth for January-September to over 7 % y-o-y, which became quite close to the finance ministry’s forecast for all of 2019. Despite a sharp drop in revenues from oil & gas taxes, third-quarter growth of total budget revenues matched the first-half pace, scoring 13 % y-o-y. While the 12-month consolidated budget surplus shrank from its 4 % of GDP peak in May, it still equalled 3.3 % of GDP in September.

Spending growth accelerated in the third quarter in nearly all major categories. For the January-September period, the housing sector’s budget spending rose by about 25 %. The rapid growth in healthcare spending that began last year continued (nearly 13 %), as did growth in education spending (about 10 %). Growth of spending allocated to various sectors of the economy rose to 8 % in the first nine months of the year, while spending on social support, administration and defence was up 5−6 %.

Increases in tax revenues other than those from oil & gas taxes remained brisk in the third quarter. The hike in the value-added tax at the beginning of this year helped sustain VAT revenue growth at a nearly 20 % pace. The share of VAT revenues rose to 18 % of total budget revenues in January-September, approaching the same scale as the revenue streams from mandatory employer social taxes and oil & gas taxes (20−21 %). 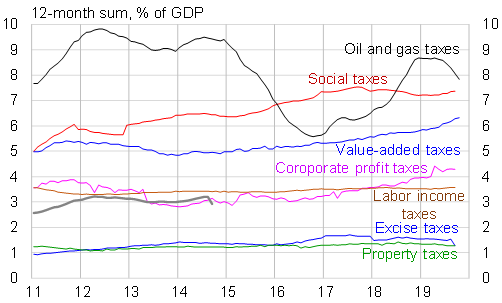