Russian manufacturing growth in October accelerated to above 3.5 % y-o-y (growth averaged just over 2 % in the first nine months of this year). The higher growth in October largely reflected a jump in oil refining output, a branch that experienced fairly weak growth in the previous six months. Growth in extractive industries, however, fell to an unusually low level of less than 1 % with simultaneous contractions in oil and gas production, a situation not seen in two years.

Agricultural production continued to show robust growth, and the nearly 4 % growth in January-October points to similar figures for the whole year. Construction activity rose in October by 1 % y-o-y, which was somewhat better than the below 0.5 % pace of January-October. Like in the third quarter, the volume of goods transported fell slightly in October, but still diverged sharply from the strong growth seen in previous years and in the first half of this year.

Growth in fixed investment improved slightly in the third quarter, but was still below 1 % y-o-y. Growth was just 0.7 % y-o-y in the first nine months of 2019.

Retail sales growth recovered from its slow pace late this summer to over 1.5 % y-o-y in October, the pace for the January-October period. Growth in real household incomes strengthened in the third quarter. Consumer credit continued to support the recovery in consumption, even if that credit support impulse has been lower than in 2018. The growth of consumer borrowing flow has been lower this year than in previous years, even if it still outpaced inflation. 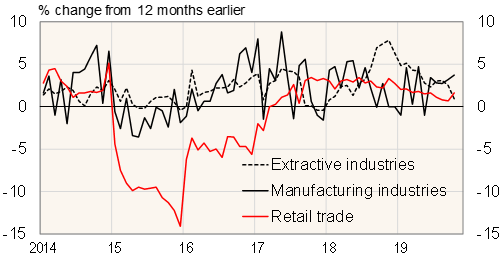