On Monday (Dec. 2), presidents Vladimir Putin and Xi Jinping celebrated the commissioning of the Power of Siberia natural gas pipeline. Gas transmission will ramp up gradually. In 2020, the volume of gas transmitted should reach 5 billion m3. Full capacity of 38 billion m3 a year should be achieved in 2024.

Russia and China reached an agreement on construction of the pipeline and gas supplies after years of talks that culminated in spring 2014. At that time, the parties signed a 30-year agreement on annual shipments of 38 billion m3 of pipeline gas per year from Russia to China. To meet the contract terms, Russia’s state-majority-owned gas giant Gazprom needs to develop two new gas deposits in Eastern Siberia and build the 3,000-kilometre pipeline for transporting gas to the Chinese border.

The first leg that was now commissioned runs for 2,200 km from the newly developed Chayandinskoye field in Yakutia to the border city of Blagoveshchensk. From there, gas is piped under the Amur river to China. The pipeline is the sole transmission connection of the Chayandinskoye field and therefore gas can be exported from there only to China. By 2022, the Power of Siberia pipeline should be extended another 800 km west to connect with the Kovyktinskoye gas field that is under construction.

Russia’s total natural gas exports amounted to nearly 250 billion m3 last year. About 175 billion m3 of that went to EU countries. China’s share of exports was less than 1 %. The start of pipeline gas exports to China has no direct impact on Russia’s gas business with EU customers. Pipeline gas exported to China comes from a newly developed gas field and that gas cannot be shipped to another foreign market. 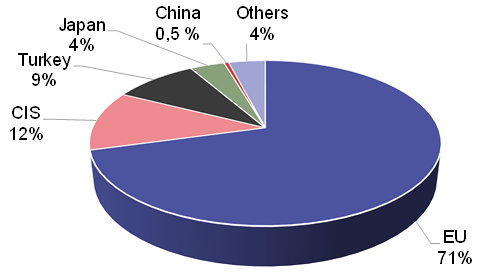