China Customs reports that the value of goods imports measured in dollars contracted by 6 % y-o-y in October. Exports were down by 1 %. In the first ten months of the year, imports were down 5 % y-o-y. Exports remained unchanged, however, so China’s foreign trade surplus increased. For the January-October period, the trade surplus amounted to 340 billion dollars, close to the value of the entire 2018 surplus.

While price and exchange-rate shifts explain some import trends, the decline in imports largely reflects lower import volumes. During the first eight months of this year, monthly goods import volumes were off about 3 % y-o-y on average. For example, the import volume of machinery & equipment was down 5 % on average, while vehicles were off by over 10 %. In contrast, the volume of exports increased by a couple per cent. The net impact from foreign trade has been to support real economic growth. 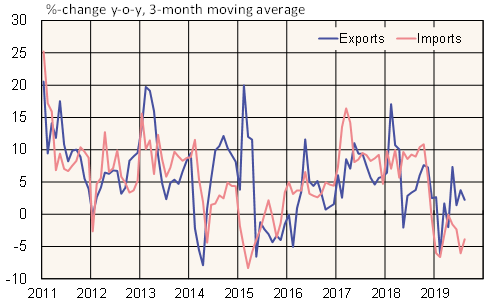