In recent weeks, the RTS (Russian Trading System) index, Russia’s core dollar-denominated stock index, has climbed to levels not seen since 2013. The rise in share prices has been driven by oil & gas companies, which account for about half of the RTS index weighting. The sub-index for companies in the oil & gas sector has risen to its highest levels in over a decade. The trends in other sectors have been more modest. Weak private consumer demand in recent years has hurt the performance of companies in the consumer sector. The financial sector sub-index has been depressed by such factors as Western sanctions and problems at certain banks.

The Russian media conglomerate RBK recently compiled a list of Russia’s fastest growing companies. Oil & gas companies are the most numerous in the list. The top ten also include companies involved in building infrastructure for the energy sector, metal ore mining, as well as firms involved in agriculture and the gaming industry. A similar list produced by the Financial Times for fast-growing firms in Europe is dominated by technology and e-commerce firms. 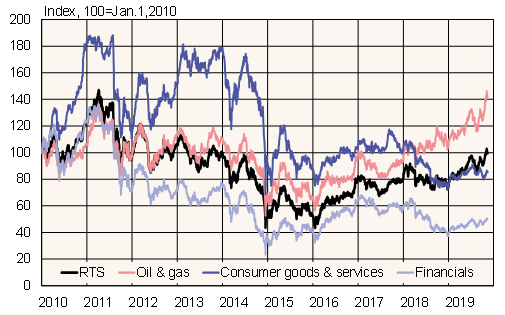