Consumer prices rose 3.8 % y-o-y in October, outpacing the government’s target ceiling of 3 %. Inflation target in China is, however, not as critical a component of monetary policy as in many other countries. The setting of the inflation target occurs at the National People’s Congress in March along with setting of many other key figures used to provide economic guidance.

The National Bureau of Statistics reports that higher prices of pork boosted consumer price inflation by 2.4 percentage points in October, when wholesale and retail pork prices were up more than 100 % y-o-y. Core inflation, which excludes food and energy prices, has held at 1.5 % since August. Producer prices fell by 1.6 % y-o-y in October.

Given the difficult economic situation, China’s decision-makers must reconcile many contradictory pressures when setting monetary policy. The People’s Bank of China this month slightly lowered the rate on its one-year medium-term lending facility (MLF) for commercial banks from 3.3 % (the rate set in April 2018) to 3.25 %. In August, the PBoC introduced a new reference rate for the pricing of bank loans based on the MLF rate (BOFIT Weekly 34/2019). Money market rates have remained fairly stable this year.

The stock of bank loans continued to grow at a rate of 12 % y-o-y in October. Growth has remained at around 12–13 % for over three years. The use of financial instruments in China’s shadow banking sector, however, has been on the decline for more than a year. 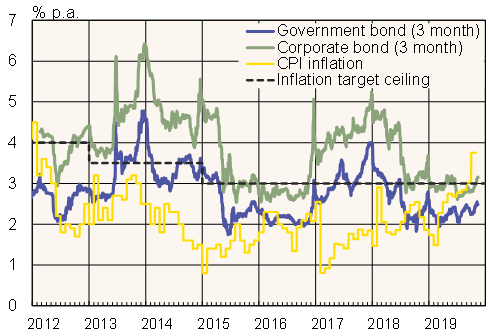