The value of Russian goods exports contracted by 5 % y-o-y in the first nine months of this year to a level of 390 billion dollars. The contraction mainly reflected lower oil prices. Combined export volume of crude oil and oil products grew by 1 % y-o-y. While the volume of natural gas exports through pipelines declined slightly, exports of liquefied natural gas (LNG) soared with the ramping up of production on the Yamal peninsula this year. Oil & gas still accounted for nearly two-thirds of Russia’s exports. Other important export products include metals (9% share) and chemical products (6 %). While metal exports have contracted this year, exports of chemical products have grown slightly.

The value of Russian goods imports in January-September was essentially unchanged from a year earlier, holding at around 175 billion dollars. While growth in imports of chemical products and metals was modest, imports of machinery, equipment & transport vehicles contracted slightly. Machinery, equipment & transport vehicles accounted for nearly half of imports. Other major import categories included chemical products (19 %) and foodstuffs (12 %).

Change in value of Russian imports in select product categories 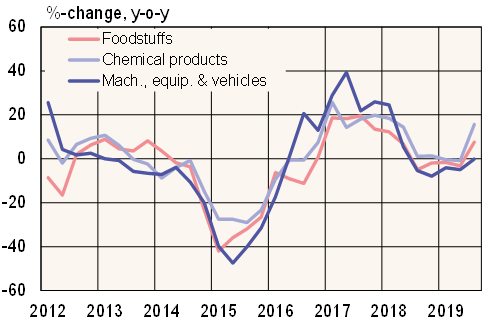