Based on the National Bureau of Statistics (NBS) 70-city sample, prices of existing apartments were up by 5 % y-o-y on average in September, while prices of new apartments rose by 9 % y-o-y. NBS figures indicate that price trends over the past two years have been quite stable and differences between cities range from drops of several per cent to increases of nearly 20 %. Other information, however, suggests that price changes and regional differences in price trends are actually much larger.

SouFun, a major real estate portal that tracks apartment prices, reported that average prices of new and existing apartments in its 31-city sample were up by 11 % y-o-y in September. SouFun’s reported differences across cities are larger than those reported by the NBS, with price trends ranging from a 10 % drop in some cities to dozens of percent increases in many others. Prices were down in September from August in nine of the 31 cities in the sample. There were 18–20 cities showing declines in July and August.

SouFun’s figures show that apartment prices (measured in liveable floorspace) in September were up on average by 14 % y-o-y in Beijing, 10 % in Shanghai, 12 % in Guangzhou and 6 % in Shenzhen. Among these cities, prices for a square metre of apartment ranged from 57,500 yuan (7,300 euros) in Shenzhen down to 29,200 yuan (3,700 euros) in Guangzhou. The average price in the total 31-city sample was 18,300 yuan (2,300 euros) per m2. Housing prices in China, when disposable household incomes are noted, are among the highest in the world.

Housing construction is a fundamental driver of the Chinese economy. While new housing starts in terms of floorspace were still up in the third quarter by 6 % from 3Q18, growth in the volume of new starts faded. In 3Q18, new apartment starts were up by 27 % y-o-y. Construction companies have acquired rights to far fewer lots than a year ago. 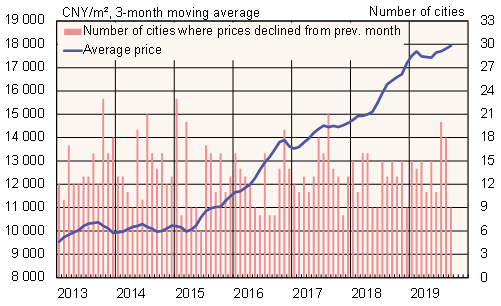